The Passing of Archduchess Sárolta of Austria (1940-2020), Daughter of the Last Duke of Teschen

On 2 November 2020, Sárolta von Habsburg-Lothringen Wutholen died at the age of eighty in Switzerland.

Born at Budapest on 3 March 1940, Sárolta (Charlotte) Isabella Mária Krisztine Eszter Katalin Pia von Habsburg, was the first child of Archduke Albrecht of Austria (1897-1955), Duke of Teschen, and his second wife Katalin Bocskay de Felsö-Bánya (1909-2000). Albrecht and Katalin married in 1938 and had two daughters: Sárolta and Ildikó (b.1942). The Second World War and its subsequent consequences were devastating for the family. Since Hungary was behind the iron Curtain, Albrecht lost most of his property, estates that at one point had made his father one of the richest Habsburgs. His marriage, by then was finished in all but name. Hence, the family had to seek new places where to rebuild their devastated lives. As a displaced person, Katalin moved to the United States with her daughters in 1949. Archduke Albrecht was granted a Mexican divorce from his wife in 1951.

After their move to the United States, Katalin gave several interviews to the press in the summer of 1949. "'Tis is a wonderful feeling, the freedom of America. No furtive looks for ever-present harassing officials. We even can go from one city to another without registering and rigamarole. Fear has almost left our hearts." About the fate of her husband Albrecht, who had ostensibly been captured by the Soviets, Katalin mused: "It seems almost hopeless. He vanished on a business trip between Hungary and Austria, in both of which he had properties, now confiscated." By 1955, Katalin and her daughters had settled in San Francisco. Shortly after learning of the death of her former husband following a heart attack in Buenos Aires, Katalin again spoke to the press: "I am not divorced from him. We are just legally separated. I never filed a divorce; I never received notice of one. In fact, I have heard nothing from my husband in all these years." She continued, elaborating on her concern for her daughters Sárolta and Kathy: "You must promise, please, to not mention my age. This is not just because of the vanity, you understand, but it might make a difference in my future. I am no longer teenaged, and I must think of my girls' future. I am their sole support and have only what I earn. This expression, 'middle-aged,' I would not object to that." Katalin and her younger daughter eventually became US citizens. Katalin von Habsburg first worked in a department store before becoming an office employee at the University of California.

Countess Sárolta von Habsburg, Princess of Hungary, attended San Diego College for Women. While she was a freshman at university in 1958, she and her mother and sister learned that a Vienna court ruled that Katalin was the legal widow of Archduke Albrecht, which entitled the family to substantial compensation. Sárolta commented on the development in the amelioration of her family's financial situation: "Well, I'm going to continue attending classes here. This won't change my plans. And, when I graduate, I still want to enter the foreign service." 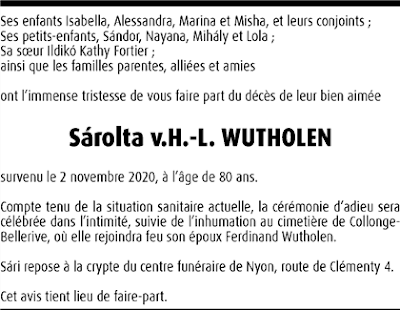 In 1967, Sárolta von Habsburg married Ferdinand Joseph Wutholen (1927-2018). The couple had four children: Isabella (b.1968), Alessandra (b.1970), Marina (b.1973), and Misha (b.1981). While entitled to use the title of Archduchess of Austria, Princess of Hungary (due to titulature changes proclaimed by the Head of the House), Sárolta chose not use them. She and her family always sought to be private people and never sought public exposure. Sárolta is survived by her children, their partners, and her four grandchildren, as well as by her sister Ildikó Kathy Fortier.

As Archduke Otto and Archduke Karl, the late and current Heads of the Austrian Imperial Family, retroactively recognised marriages of archdukes who had married Christian brides (who were considered unequal at the time of their unions) as dynastic, Sárolta was entitled to the title and style Her Imperial and Royal Highness Archduchess Sárolta of Austria, Princess of Hungary. However, her family confirmed that she never claimed nor used any titles at all.

May Sárolta Rest In Peace.