Today, 10 January, King Constantine II of Greece died at Hygeia Hospital in Marousi, a suburb of Athens. The king was eighty-two years-old.
Prince Constantine of Greece and Denmark was born at the villa of Psychiko, home of his parents, on 2 June 1940. A 101 gun salute from Mount Lycabettus at 6pm that evening announced to Athens that a new prince had arrived into the world. Crown Princess Frederica recalled: "My two elder children, Sophie and Constantine, were born in my sitting-room in our small house. My parents came for Sophie's birth but, when Tino was born, the war had already started and they could not come. Palo [Paul] stayed with me all the time and held my hand. The Prime Minister sat downstairs with the King, because it was the custom that the Prime Minister should be in the house." The Acropolis was floodlighted in celebration of the prince's birth, and guns were fired in salute throughout the country. The baby boy was named after his paternal grandfather King Constantine I of Greece; Prince Constantine was christening on 20 July 1940 at the Metropolitan Cathedral. The prince was the first son and second child of Crown Prince Paul of Greece and Crown Princess Frederica (born Princess of Hannover), who wed in 1938. Constantine joined an older sister, Princess Sophia (b.1938); he was followed by a younger sister, Princess Irene (b.1942). At the time of his arrival, Constantine's uncle George II was King of Greece; the infant prince was second in the line of succession after his father Paul.
King George II of the Hellenes passed away at Athens on 1 April 1947 at the age of fifty-six. He was succeeded by his last surviving brother, who became King Paul I. At the time, the new Crown Prince Constantine of Greece was only six years-old. The crown prince accompanied his father during the funeral of his uncle. Constantine was educated at a preparatory school and later a boarding school, the Victoria College of Alexandria, Egypt, where his classmates included King Hussein of Jordan. A fellow student recalled him as "a good chap, a young man with all the right instincts. He was at his best on the playing fields." Constantine was also a pupil at Anavryta, a secondary school established at Sygnros in Kifissia; the prince attended this institution for nine years. Crown Prince Constantine served in all three branches of the Hellenic Armed Forces and attended the requisite military academies. The Greek heir also attended the NATO Air Force Special Weapons School in Germany, as well as the University of Athens, where he undertook courses in the school of law.

When Crown Prince Constantine came of age in 1958, he swore allegiance to his father and to the Greek people. On the crown prince's eighteenth birthday on 2 June 1958, King Paul delivered this address to his only son:

God has graciously destined you to reign over this glorious, gallant and noble Nation of ours.

This sacred favour given to you, is an outstanding mark of honour and a legacy of great responsibility.

As from this day, you shall be my partner in the endeavour to further the progress and well-being of my people.

I am confident that your love of the Greek People, equal as it is to my own profound affection for them, will bring you as great happiness as it brings to me. In paying the price of their glorious history and enduring the consequences of their age-long struggles even to this day, in defence of mankind, the Greek People have not as yet been able to develop their capabilities to the full and achieve the standard of well-being to which they are justly entitled. For this very reason, they deserve every mark of affection and regard and every act of sacrifice on your part.

Be a just, kind and indefatigable worker for the advance and glory of Greece.
Uphold steadfastly the Democratic Principles of our institutions and the Constitutional Liberties of our People.

Devote your life to the happiness of the Country. There is no task more noble and more important than this. Always remember that it is preferable that the King should suffer than that the suffering should fall on the Nation and the Country. Endeavour to show yourself worthy of the Greek Soldier whose leader you will be in the future. When the time comes, you will take your place at the head of the Greek Armed Forces, the bearers of a heroic and glorious tradition.

Keep them devoted to duty and battle-worthy, the guardians of our tradition, respected by our friends and feared by our foes, the priceless jewel of a proud Nation.
May they never be forced to strike.

Be the protector and guardian of our Holy Church.
Draw your strength from the love between you and your people.
Redress offence by pardon,
Discord by unity,
Error by truth,
Doubt by faith.

I pray that you and my People may know days of glory in the noble struggle for progress and civilisation.

May God Almighty make you an instrument of peace and always keep guard over Greece and over your, Constantine, my son.

In 1959, at the age of nineteen, Constantine met his future wife, his third cousin Princess Anne-Marie of Denmark, aged thirteen, on a visit to Denmark. Anne-Marie was the third and last daughter of King Frederik IX of Denmark and Queen Ingrid. Constantine and Anne-Marie met a second time in Denmark in 1961, when Constantine declared to her parents his intention to marry Anne-Marie; at this point King Frederik briefly locked Constantine in the toilet. They met again in Athens in May 1962 at the marriage of Constantine's sister Princess Sofia of Greece and Denmark to Prince Juan Carlos of Spain at which Anne-Marie was a bridesmaid: and again in 1963 at the centenary celebrations of the Greek monarchy.
When he was on a tour of the United States, Constantine spent time with his cousin King Simeon II of Bulgaria, who at that time was a student at the military school at Valley Forge. The two royals were pulled over by a policeman. Though neither Constantine nor Simeon had identification on them, they presented themselves as "Crown Prince of Greece" and "King of Bulgaria." Needless to say, they were briefly arrested before the Greek embassy intervened and verified their identities. In 1960, aged twenty, Crown Prince Constantine won an Olympic gold medal in sailing, which was the first Greek gold medal in sailing since the Stockholm 1912 Summer Olympics. He was also a strong swimmer and had a black belt in karate.

Aged sixty-two, King Paul I of Greece died at Athens on 6 March 1964, and Constantine succeeded to the throne. In his biography of the new king, entitled HM Konstantine XIII, G. Nicholas Tantzos presented Constantine's daily routine once he became monarch: "The King's average day commenced about 7:30 AM with a breakfast of coffee, boiled eggs and toast, after which he read the newspapers and smoked his first cigarette. Unless there were formal meetings, the King dressed casually in slacks and sweater. By 9 AM he commenced conferences with his staff, going over state papers, and holding audiences, and attending meetings. Lunch was scheduled for 1:30 PM, but the King was usually late. In the afternoon he sometimes played squash with the Assistant Military Attache from the American Embassy, then returned to his office. There were many royal duties: opening factories, trade fairs, presiding over international functions and charitable institutions, reviewing military parades and such. His day usually ended after 9:30 PM in the evening, when he returned to the Palace. Sometimes he listened to music or watched a movie in the Palace basement, or had friends around for drinks."

On 18 September 1964, King Constantine II of Greece and Princess Anne-Marie of Denmark were wed at the Metropolitan Cathedral in Athens. In 1967, following political instability, the King and Queen, with their two eldest children, fled from Greece to Rome, where they lived for a time. In 1974, the Greek monarchy was abolished. In 1980, Constantine and Anne-Marie established the Hellenic College of London, where their children were educated in Greek and English.
The King and Queen had five children: Princess Alexia (b.1965), Crown Prince Pavlos (b.1967), Prince Nikolaos (b.1969), Princess Theodora (b.1983), and Prince Philippos (b.1986). In 1995, Crown Prince Pavlos married Marie-Chantal Miller; the couple have five children: Princess Maria-Olympia, Prince Constantine-Alexois, Prince Achileas-Andreas, Prince Odyseus Kimon, and Prince Aristidis-Stavros. In 1999, Princess Alexia married Carlos Morales y Quintana; the couple have four children: Arrietta Morales y de Grecia, Anna Maria Morales y de Grecia, Carlos Morales y de Grecia, and Amelia Morales y de Grecia. In 2010, Prince Nikolaos married Tatiana Blatnik. In 2020/2021, Prince Philippos married Nina Flohr. Princess Theodora is engaged to Matthew Kumar. 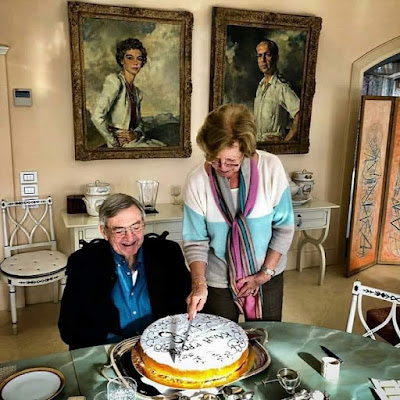 In 2013, King Constantine and Queen Anne-Marie returned to live in Greece. They made their home at Porto Heli; they moved to Athens in recent years. The king suffered a stroke in 2018. In December 2021, he was admitted to an Athens hospital for treatment of pneumonia and subsequent pulmonary edema caused by aspiration. In January 2022, the king spent several days in hospital after contracting the coronavirus. 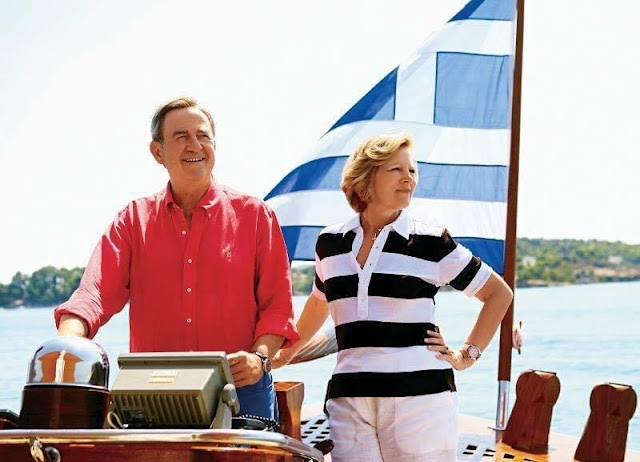 May His Majesty Rest in Peace.
Posted by Seth B. Leonard at 4:29 PM