A Letter from Princess Mary, Duchess of Gloucester, to Lady Harcourt

I found your most kind and affectionate note on my table late night on my return from Windsor. I never could doubt all your kind feelings on hearing of my intended marriage; and I am unhappy I did not write myself to you, as I look upon you quite as a 2nd mother, & respect you as such; but the real truth is, that, though the Q. and Prince gave their consent on Saturday, & felt satisfied all was settled, I was not quite so myself untill last night. However, I started a subject to the D. of Gloucester that required a very decided answer, before I could make up my mine to change my intention. I got a satisfactory answer last night through the D. of York, therefore I can now say we compleatly understand each other. When I see you I will explain this.

I don't know what other people feel when going to be married, but as yet I have done nothing but cry. I have been half killed with the kindness of the Queen and all my Brothers & Sisters, & such a day as I passed at Windsor yesterday is more than I can describe. That dear Castle, which contains all I value in this world; that dear place, in which I have passed so many happy days; that spot in which my most valuable & respectable Father is incircled. That, Alass, I am not to receive his Blessing and approbation, with those of all the rest of the family, half kills me; and the idea of heaving that House at Moments half breaks my heart. But the D. of Gloucester has so kindly entered into all my feelings, so faithfully promised that I shall be as much with my family as possible, and is so convinced how it is in my power to do my duty as his wife, as well as to do my duty at Windsor (to a certain degree), that it makes me thank God.

His house is so near, only 3 miles, as to admit of all this.

Source: The Royal Dukes and Princesses of the Family of George III: A View of Court Life and Manners for Seventy Years, 1760-1830 (Volume 2) by Percy Hetherington Fitzgerald, 1882.

Over the weekend, the Head of the Royal House of Portugal and his daughter traveled to East Timor to commemorate the twenty years of independence of East Timor. Dom Duarte Pio and Infanta Maria Francesca were present in Dili for the celebrations. The Duke of Braganza was a major supporter and campaigner for the independence of East Timor (Timor-Leste), a former Portuguese colony that was annexed by Indonesia in 1975. The country received its independence on 20 May 2002.
Posted by Seth B. Leonard at 7:00 AM No comments:

On 30 April 2022, Prince Raphaël Léopold Pedro François Marie d'Orléans was baptised at Mallorca. The little prince, who was born on 4 September 2021, is the third child of Prince François and Princess Theresa, Count and Countess of Dreux. Prince Raphaël received as his godparents: Prince Pedro of Bourbon-Two Sicilies, Duke of Calabria, Princess Marie-Hélène von Ysenburg und Büdingen, and Regina von Bernewitz.

For many more photos and information, please visit these articles:

Princess Sixtina of Waldeck-Pyrmont died on 18 May 2022. She was eighty-eight years-old.

In August 1989, Princess Christine Henriette Bathildis zu Waldeck und Pyrmont married Count Hermann zu Castell-Rüdenhausen (b.1963). The couple have three children: Countess Annabell (b.1991), Countess Cecily (b.1992), and Count Casimir (b.1994). Hermann is a younger brother of the late Countess Donata zu Castell-Rüdenhausen (1950-2015), wife of Prince Louis Ferdinand of Prussia (1944-1977) and Duke Friedrich August of Oldenburg (1936-2017). Henriette, who studied geography at university, is thus an aunt-by-marriage of Prince Georg Friedrich of Prussia, the Head of House Prussia.

Georg-Friedrich and Sixtina's second daughter Princess Marie Isabelle zu Waldeck und Pyrmont has made her career as an employment and occupational therapist. In December 1989, Isabelle changed her surname to be simply "Waldeck." She has one son, Constantin.

Philipp-Heinrich, the only son of Georg-Friedrich and Sixtina, has never married and has no children. He is currently fourteenth in the line of succession to the Head of the Princely House of Waldeck and Pyrmont.
May the Princess Rest in Peace.
Posted by Seth B. Leonard at 7:00 AM 1 comment: 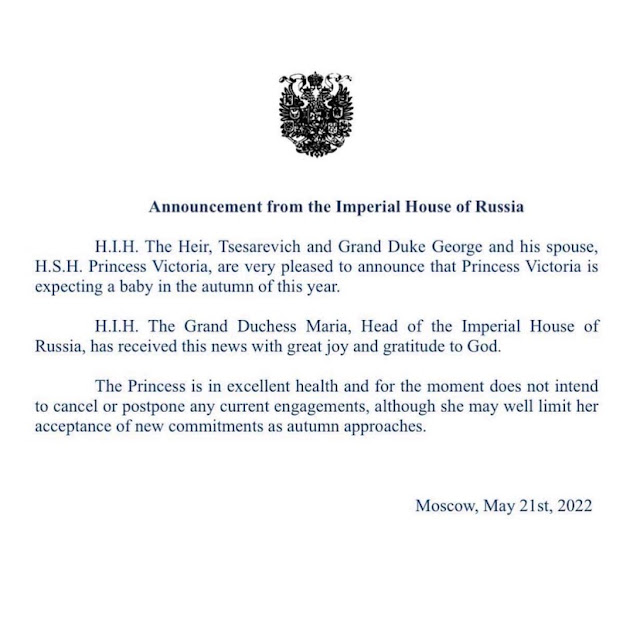 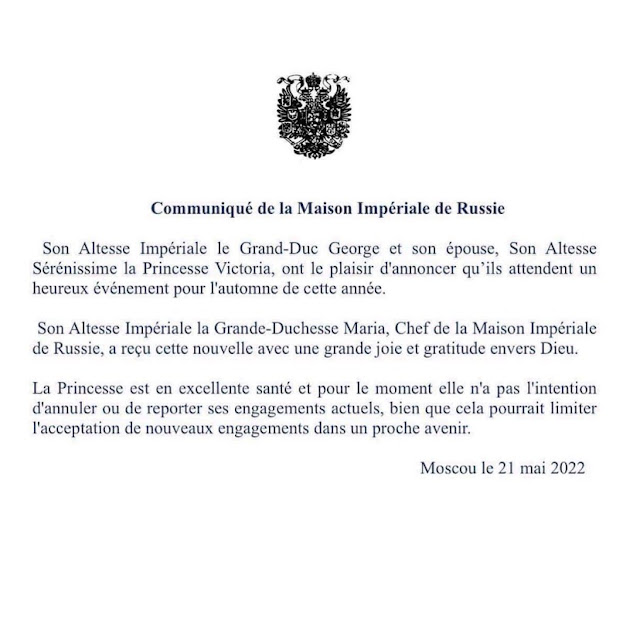 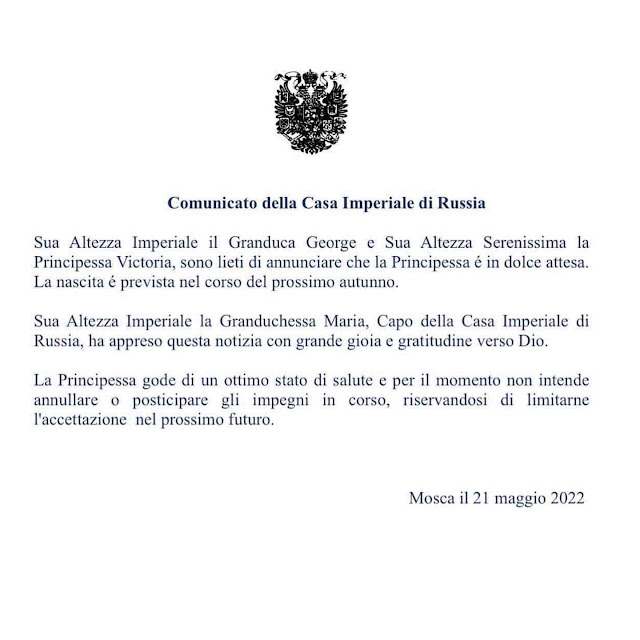 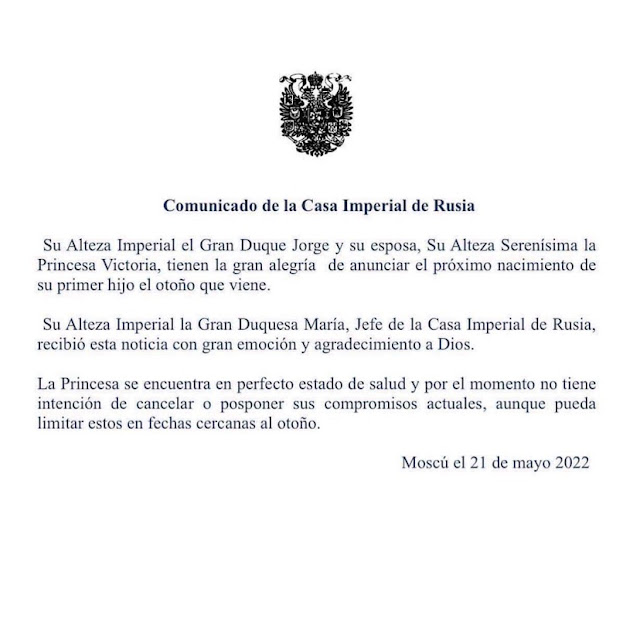 Our congratulations to Grand Duke George and Princess Victoria on this most joyous news! May God grant the Princess a safe pregnancy! 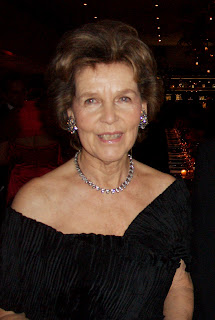 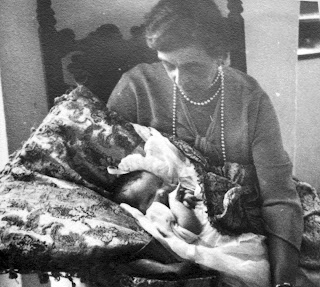 Interestingly, this Portuguese ancestry connects Helen to a plethora of royal personages. Maria José's siblings included: The Duke of Braganza (whose descendants include the present holder of the title, Dom Duarte, as well as descendants in the houses of Liechtenstein and Thurn und Taxis); Archduchess Maria Teresa of Austria (last wife of Archduke Karl Ludwig [1833-1896], a brother of Emperor Franz Joseph as well as the great-grandfather of Archduke Ferdinand, Helen's late husband); Grand Duchess Maria Anna of Luxembourg (who married Grand Duke Guillaume IV and who was the mother of six daughters, among them Grand Duchesses Marie Adelaide and Charlotte, as well as Crown Princess Antonia of Bavaria); and Duchess Maria Antonia of Parma (who was the second wife of Duke Robert, by whom she had twelve children, among them: Prince Felix of Luxembourg, Empress Zita of Austria and Duke Francesco Xaverio of Parma, to name a few).

Helen passed the war years in Bavaria, where her family felt protected from the atrocities consuming Europe. Her father's opposition to the National Socialists and her mother's outright and intense dislike for Hitler and his cronies made it imperative that then family remain in semi-isolation, while living quietly. The fact that Princess Elisabeth's sisters (Olga of Yugoslavia and Marina of Kent) were married into families that opposed Nazi Germany during the war only made life more fragile for the Toerring-Jettenbachs.

With peace in 1945 also came an opportunity for the family of Countess Helen to renew long-lost connections to their royal relations outside Germany. Visits to Athens to see Grand Duchess Helen and other members of the Greek royal family were soon arranged, while others traveled to Bavaria to reconnect with the Toerring-Jettenbachs. Luckily, Schloß Winhöring was unscathed by the ravages of war and the bombings that Munich underwent. 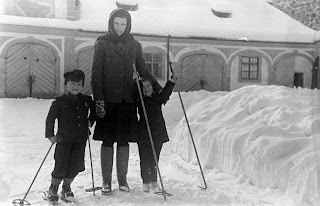 Princess Elisabeth of Greece (Countess zu Toerring-Jettenbach) with her children Hereditary Count Hans Veit and Countess Helen – Schloß Winhöring, c. 1944.
Tragedy, however was also around the corner. In 1955 Princess Elisabeth succumbed, quite rapidly, to a malady that she had been fighting against. The previous year the family of Grand Duchess Helen, a widow since 1938, suffered a sad blow when Prince Nicholas of Yugoslavia, second son of Princess Olga and Prince Regent Paul, died in a car crash in England. 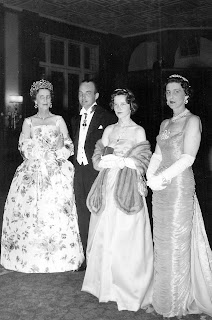 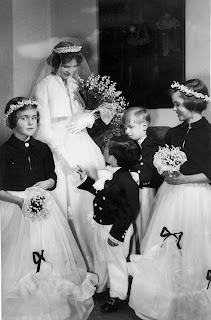 Archduchess Helen on her wedding day.
However, as life always does, great loss is oftentimes replaced by deep happiness. Such was the case in 1956 when Countess Helen married a longtime family friend, Archduke Ferdinand of Austria (1918-2004), eldest son of Archduke Maximilian (1895-1952) and of his wife Princess Franziska zu Hohelonhe-Schillingsfürst (1897-1989). Ferdinand and Helen were to be married for nearly five decades.

The couple were blessed with three very attractive and delightful children: Elisabeth (1957-1983), Sophie (b. 1959) and Maximilian (b. 1961). They were raised in various European countries as Archduke Ferdinand's business obligations demanded relocation every so often. However, throughout the family remained much attached to London, Munich and Salzburg, where Ferdinand's mother lived. They also retained countless links to most of their royal relations across the continent, particularly with King Constantine II of the Hellenes and Queen Sophie of Spain, as well as with Helen's first cousins of Yugoslavia and Kent. 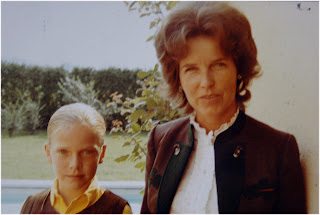 In the meantime, Archduchess Sophie, who can easily be argued is one of the most strikingly beautiful royals, was making a name for herself as both a top model and an humanitarian devoted to orphaned children. After several attempts at finding a soul mate, Sophie married Fürst Hugo zu Windish-Grätz in 1990. The couple settled in Italy, where Furst Hugo has vast interests as well as playing an important role within the Vatican's administrative structure. Hugo has also served as Ambassador of the Sovereign Military Order of Malta. 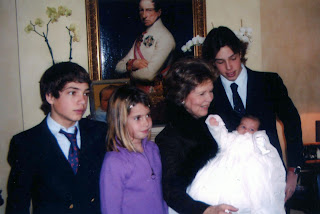 The baptism of Archduke Nikolaus: Prince Alexis, Princess Larissa, Archduchess Helen with baby Nikolaus and Hereditary Prince Maximilian.
Hugo and Sophie had three children: Hereditary Prince Maximilian (b. 1990), Prince Alexis (1991-2010) and Princess Larissa (b. 1996). The death of their son Alexis was a deeply sad tragedy for the boy's parents and his grandmother Helen. Christian fortitude and a deep belief in Catholic principles allowed the family to find the strength to overcome this immensely challenging loss.

The family's benjamin, Archduke Maximilian settled in Madrid, where he works in the medical device field. Maximilian Heinrich Ferdinand of Austria was born in Boulogne-sur-Seine in 1961. In 2005 he married Maya Al-Askari, a lovely lady whose family proudly claims descent from the Prophet Mohammed. Max and Maya have been blessed with three children: Archduke Nikolaus (b. 2005), Archduke Constantin (b. 2007) and Archduchess Katharina (b. 2010). All children were born in Madrid, where Max has lived for the better part of the last quarter century. 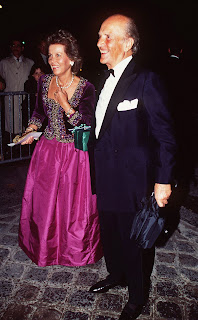 Today, on Archduchess Helen's 85th birthday, we at Eurohistory, wish her the very best and may God continue keeping a watchful eye over the life of a truly lovely lady...
Posted by Seth B. Leonard at 6:26 PM No comments:

Born in Rome on 18 May 1982, Rebecca Virginia Bettarini was the first daughter and only child of His Excellency Ambassador Roberto Bettarini and his wife Carla Virginia Cacciatore. Due to her father's many diplomatic postings, she grew up in Europe, the Middle East, and South America. She studied political science, with an emphasis on international and European studies, at Luiss Guido Carli University; the princess went on to obtain a master's degree. She also worked as a volunteer for the Sovereign Military Order of Malta. In 2017, Rebecca Bettarini became the Director of the Russian Imperial Foundation. In 2020, Rebecca was received into the Russian Orthodox Church with the name Victoria Romanovna, in honour of the Holy Martyr Victoria of Rome, and in memory of Grand Duchess Victoria Feodorovna. Victoria's engagement to Grand Duke George Mikhailovich of Russia was announced in January 2021. Her mother-in-law, Grand Duchess Maria, decreed that Victoria would be styled and titled HSH Princess Victoria Romanova Romanoff after her marriage. Grand Duke George and Princess Victoria were religiously wed in October 2021 at Saint Petersburg. The couple live in Moscow, where they are engaged in charitable works and philanthropic endeavours.

Our best wishes the Princess on her birthday!

To learn more about Princess Victoria, you may read these articles: