The Mysterious Origins of the “Duc de Royan” 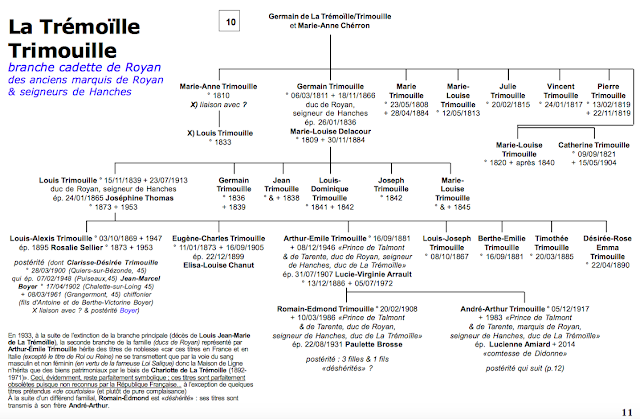 According to an online genealogy of the La Trémoille family, Jérôme Trimouille is the eldest son of Jean Claude Arthur Andre Trimouille (Boynes 5 November 1947-Corbeil-Essonnes 17 February 2015) and Martine Deniau (b.1955). Jérôme's paternal grandparents were Andre Georges Arthur Trimouille (Boynes 5 February 1917-Gironville-sur-Essonne 9 April 1983) and Lucienne Amiard (d.2014). As one can see by referring the above genealogy, the members of the current Trimouille family appear to hold numerous noble titles — in reality, they have no right to bear these titles. Jérôme himself claims to hold the following titles: "Prince de Talmont & de Tarente, duc de Royan, seigneur de Hanches, duc de La Trémoïlle." On his website, Jérôme Trimouille includes this information about how to address a member of his family:

How do you address a member of the ducal family? 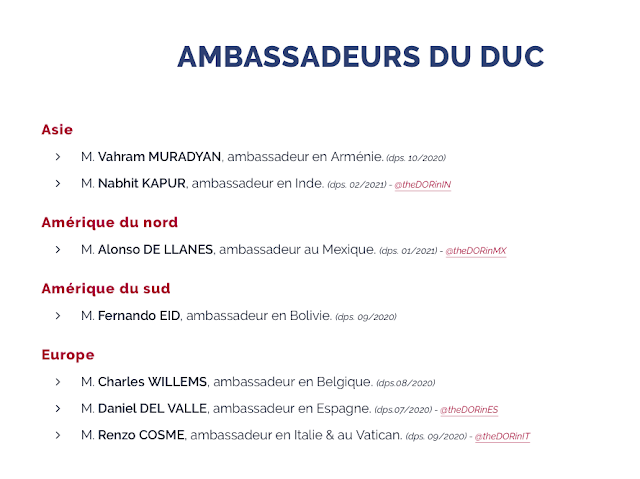 According to his website, Jérôme Trimouille has appointed ambassadors to Armenia, Belgium, Bolivia, India, Italy and the Vatican, Mexico, and Spain. There is no information whatsoever on the role of these ambassadors or whether they have any accreditation to the governments of the countries where they apparently have a diplomatic mission. 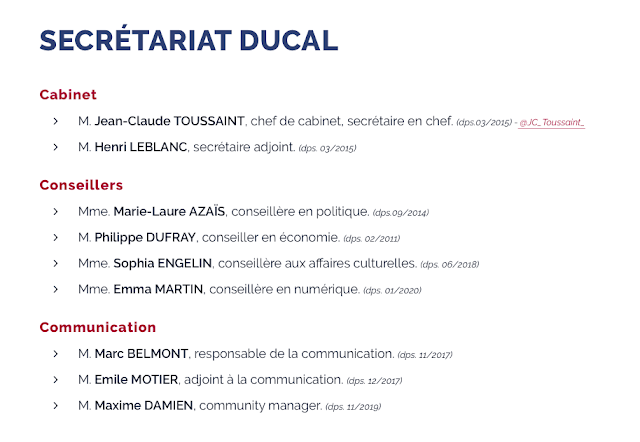 A ducal secretariat also exists: the “Duc de Royan” has a cultural affairs advisor, an economic advisor, and a political advisor. 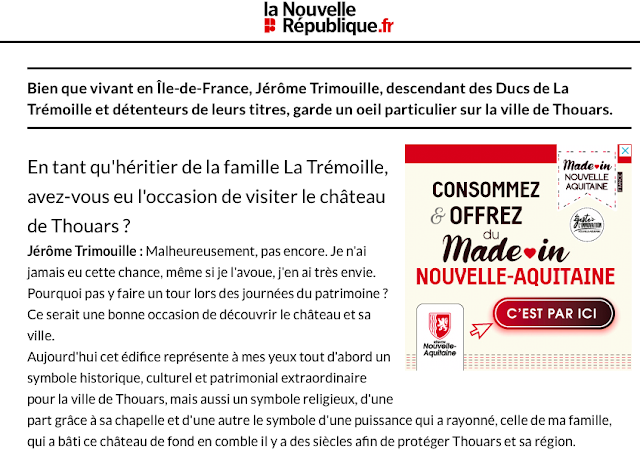 Jérôme Trimouille first appeared in the French press in May 2019. He was interviewed by La Nouvelle République on 2 May 2019 for an article concerning the château de Thouars. Although he had never visited the château, Jérôme stated that he was in favour of it being opened to the public. In the article, entitled Jérôme Trimouille: "Je me sens Thouarsais de coeur", he was presented as "a descendant of the Dukes de La Trémoille and holders of their titles." When asked by the author of the article as the whether the succession of the Trimouille family was secure, Jérôme replied: "Absolutely. This unique link between the city of Thouars and my family is not about to break since my sons Kévin (born in 1997) hereditary prince de La Trémoille and Marvin (born in 2001) prince of Naples, already ensure the future of the House de La Trémoille." In an earlier brief snippet from La Nouvelle République on 1 May 2019, it was written of Jérôme that: "Descendant de la branche cadette, dite des « marquis de Royan et comte d’Olonne », Jérôme Trimouille est donc aujourd’hui titulaire des titres de prince de Talmont et Tarente, duc de La Trémoïlle, de Thouars, de Noirmoutier et de Taillebourg, marquis de Royan et d’Espinay, baron de Sully, comte de Laval, de Guînes et de Montfort, ainsi que prétendant au trône du royaume de Naples." 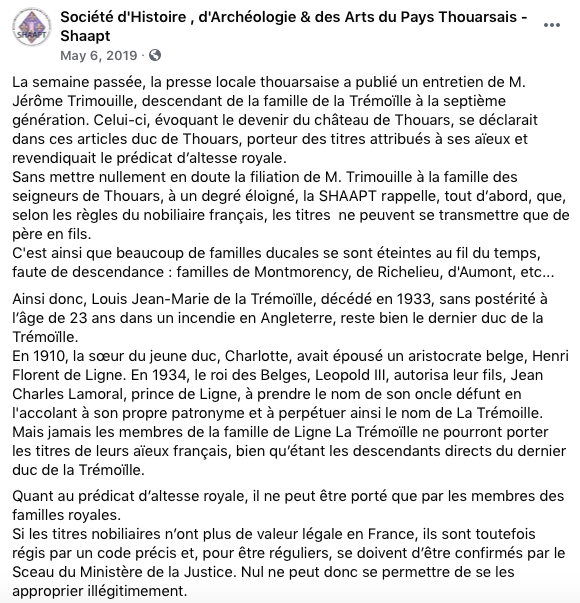 On 6 May 2019, the Société d'Histoire, d'Archéologie & des Arts du Pays Thouarsais (Shaapt) issued the following statement after becoming aware of Jérome Trimouille's interview on 2 May:

Last week, the local Thouars press published an interview with Monsieur Jérôme Trimouille, a seventh generation descendant of the La Trémoïlle family. Monsieur Trimouille, evoking the future of the château de Thouars, declared himself in these articles to be the Duc de Thouars, bearer of the titles attributed to his ancestors as well as the style of royal highness.

Without in any way questioning the descent of Monsieur Trimouille from the family of the lords of Thouars, to a distant degree, the SHAAPT recalls, first of all, that, according to the rules of the French nobility, titles can only be transmitted from father to son.

This is how many ducal families have died out over time, due to a lack of descent: families from Montmorency, Richelieu, Aumont, etc.

In 1910, the young duke's sister, Charlotte, married a Belgian aristocrat, Henri Florent de Ligne. In 1934, the King of the Belgians, Leopold III, authorized their son, Jean Charles Lamoral, Prince de Ligne, to take the name of his late uncle by appending it to his own surname and thus to perpetuate the name of La Trémoille. But the members of the de Ligne de La Trémoïlle family will never be able to bear the titles of their French ancestors, despite being the direct descendants of the last Duke of Trémoïlle.

As for the royal highness predicate, it can only be worn by members of royal families.

While noble titles no longer have legal status in France, they are however governed by a specific code and, to be regular, must be confirmed by the Seal of the Ministry of Justice. No one can therefore afford to appropriate them illegitimately.

Source: Société d'Histoire, d'Archéologie & des Arts du Pays Thouarsais - Shaapt
The last Duc de La Trémoille, Louis-Jean-Marie de La Trémoille, was tragically killed during a fire at a country house in Whitchurch, Hampshire, England, on 9 December 1933. Louis was twenty-three years-old. With his death, according to most published sources, the La Trémoille family became extinct in the male line. After the passing of the last duke, the descendants of his sister Charlotte de La Trémoille (1892-1971) and her husband Prince Henri de Ligne (1881-1967) were authorised by the King of Belgium to bear the title Prince(ss) de Ligne de La Trémoille. Furthermore, successive issues of the Almanach de Gotha make no mention of a junior branch of the La Trémoille family.
Posted by Seth B. Leonard at 7:00 AM