Yesterday, Prince Rostislav Rostislavovich Romanovsky and his wife held their religious wedding in France. The couple were civilly married two years ago in 2019 during a ceremony in the United Kingdom. On the invitations sent out for the religious wedding and in a related press release, Prince Rostislav Romanovsky is referred to as Son Altesse Impériale (His Imperial Highness). This is a style which the prince does not possess.

Having learned of the new "imperial" pretensions of Rostislav Romanovsky, last week the Assembly of the Russian Nobility (ARN) sent me a copy of a letter that the organisation is circulating to clarify its stance in regards to the Russian Imperial House and its morganatic relatives.

The content of the letter is more or less as follows:

The Russian Nobility Assembly is an Association that gathers in Russia over 12,000 members and has several delegations abroad, and whose members are descendants of Old Noble Families of the Russian Empire and which was restored in 1990 in close cooperation with the Imperial House of Russia, whose Head at the time was His Imperial Highness Grand Duke Vladimir Kyrillovich and after 1992 his daughter and successor Her Imperial Highness Grand Duchess Maria Vladimirovna as the only legitimate Heir of the Russian Imperial House.

There are many descendants of the Romanov Family who are not members of the historical Dynasty by the laws that were in force at the time of the Russian Empire.

The Members of the Russian Nobility Association extend their warmest congratulations on the occasion of the upcoming wedding of Rostislav Romanov but must emphasise that although Rostislav Romanov is a true descendant of the Romanov Family, his marriage is a private event which does not bear any social or dynastic importance. We wish the newlyweds and their 8 year-old son "Многая лета [Many years]!"

Marshall of the Russian Nobility,

Marshall of the Moscow Nobility, 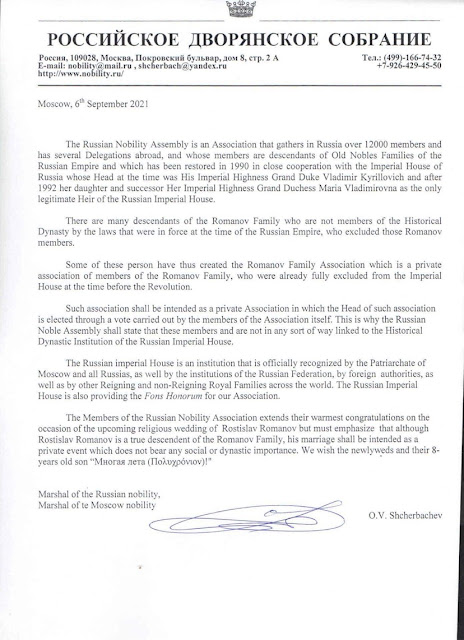