After Insurrection in District of Columbia, Crown Prince Pavlos of Greece Advises Removal of US President 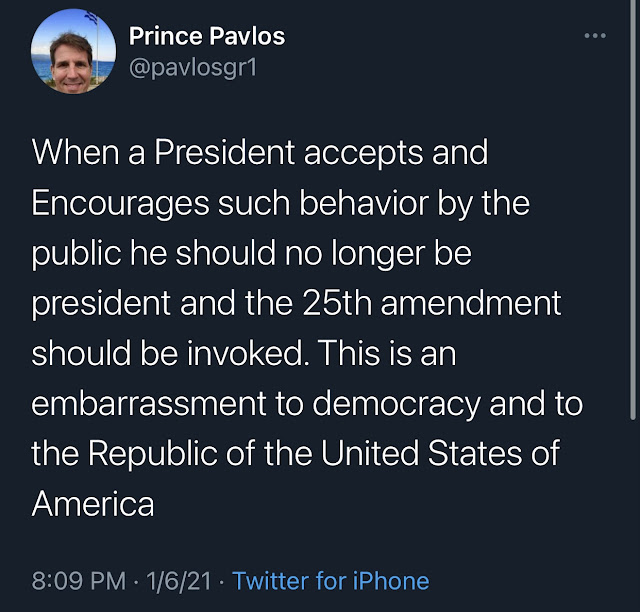 Wednesday, 6 January 2021, will not be a day that is fondly remembered by citizens and residents of the United States of America. On this date, the current occupant of the Presidency of the United States presided over a rally in the morning/early afternoon, during which he called for his supporters to "march" to Capitol Hill if the U.S. Congress voted to recognise the results of the 2020 U.S. Presidential Election. As a result, supporters of Donald J. Trump, who was impeached last year, ended up storming Capitol Hill: this resulted in the disruption of the business of the Senate and House of Representatives, the assault of Capitol Hill police officers by Trump-supporting rioters, and the vandalism of the American capitol buildings. These series of awful events have been widely reported, both in the United States and around the world, as an attempted coup d'état. World leaders from Belgium, Canada, France, Germany, Great Britain, New Zealand, Norway, and Spain, have condemned the attack on the democratic institutions of the United States.

As a result, on Wednesday evening, Crown Prince Pavlos of Greece issued a statement on Twitter calling for the 25th Amendment of the United States Constitution to be invoked. The crown prince is well-versed in the consequences of successful coups in democratic countries, as it was one such insurrection that cost Pavlos' father, King Constantine II, his throne and the continuation of the Greek constitutional monarchy. The message of the Crown Prince of Greece is as follows: "When a President accepts and Encourages such behaviour by the public he should no longer be president and the 25th amendment should be invoked. This is an embarrassment to democracy and to the Republic of the United States of America." 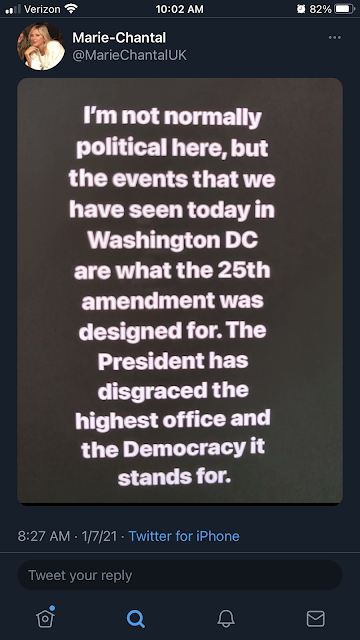 On Thursday morning, 7 January, Crown Princess Marie-Chantal of Greece issued a similar message via her Twitter account: "I'm not normally political here, but the events that we have seen today in Washington DC are what the 25th amendment was designed for. The President has disgraced the highest office and the Democracy it stands for."

God Bless the Crown Prince and Crown Princess of Greece for their support of democracy during a turbulent time.