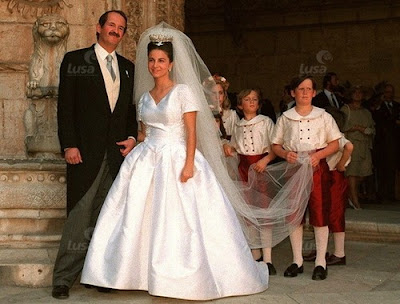 On 13 May 1995, Dom Duarte Pio João Miguel Gabriel Rafael de Bragança (b.1945), the Head of the Royal House of Portugal, married Dona Isabel Inês Castro Curvello de Herédia (b.1966). Duarte was the son of Dom Duarte Nuño (1907-1976), Duke of Bragança, and Princess Maria Francisca of Orléans-Bragança (1914-1968); Isabel was the daughter of Dom Jorge de Herédia and Dona Raquel Leonor Pinheiro de Castro Curvello. The Duke and Duchess of Bragança were wed at Jerónimos Monastery in Belém, Lisbon. Theirs was the first Portuguese royal marriage to be held in the country since that of the eventual King Carlos I of Portugal (1863-1908) and Queen Amélie (1865-1952; née Orléans) in 1886.

The celebrations surrounding the wedding of D. Duarte and D. Isabel's marriage were truly of magnificent proportions. Royal guests began arriving on Thursday, 11 May, in Lisbon - that evening, a bullfight was held that had the Duke of Bragança and dona Isabel surrounded by the Hereditary Grand Duke and Grand Duchess of Luxembourg on their left and the Countess of Paris ("Tante Bebelle" to the duke, whose late mother Maria Francisca was the sister of Isabelle, Countess of Paris). Bourbons, Habsburgs and Savoys were also in the crowd to watch the bullfight at the arena of Campo Pequeno.

On Friday, 12 May, guests attended a welcome dinner hosted at Queluz Palace. The evening began with a tea served at the Palace Hotel, followed by an exhibition held by the Portuguese School of Equestrian Art and afterwards a group of Timorese people interpreted diverse typical dances with motifs related to marriage and maternity. There was also a concert performed by several student musical groups, at the end of which the dinner was served, in the Rooms of Glasses and Music of the Palace. 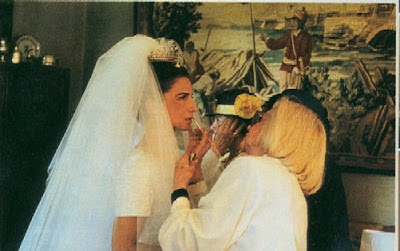 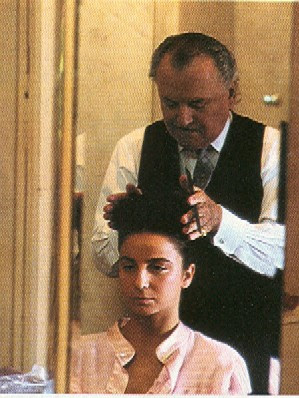 The royal wedding occurred on the following day, 13 May; it was broadcast live on Portuguese television. Dom Duarte had stated that "I would feel more comfortable with a quiet wedding, but I realize that a lot of people want to celebrate with us." Dona Isabel noted: "I want my wedding to be above all a religious ceremony. These are not suitable times for great parties, with so many needy people." However, owing to the 3,000 person guest-list, it was inevitable that the Bragança nuptials would be on a grand scale. The bride's wedding gown was designed by Portuguese couturier Laurinda Farmhouse and her hair was done by Alexandre of Paris.

The Duke of Bragança arrived at Jerónimos Monastery at 3:55pm with his brother Dom Miguel. Shortly thereafter, Dona Isabel arrived on the arm of her father, Dom Jorge de Herédia. The religious ceremony was conducted by His Beatitude the Patriarch Cardinal of Lisbon, D. António Ribeiro. There was a sense that the wedding of the Head of the Royal House of Portugal and his Consort was a semi-state occasion, owing to the attendance of the Portuguese President Mário Soares with his wife as well as of Prime Minister Aníbal Cavaco Silva with his wife. Of course, the Gotha was also out in full force to witness the wedding of one of their most amiable cousins to the splendid young woman who had accepted his hand in marriage.

After the religious ceremony, the newly married Duke and Duchess of Bragança exited the Monastery and greeted their fellow countryman and other spectators who had gathered outside to join in the celebrations of the special day. 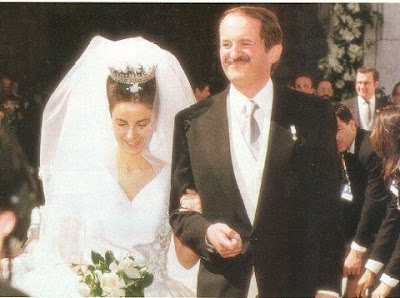 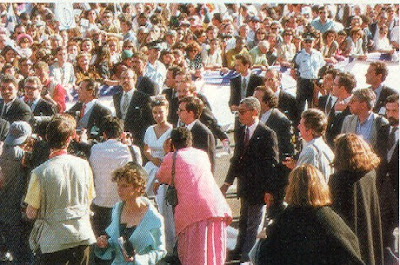 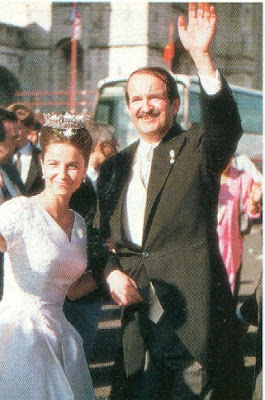 Eurohistory wishes TRH the Duke and Duchess of Bragança a very Happy Anniversary!
Posted by Seth B. Leonard at 6:44 PM