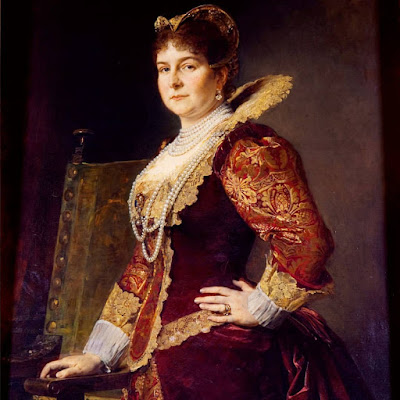 On 14 May 1922, the Princess of Festetics von Tolna died at Budapest, aged seventy-one. The princess was a first cousin of Queen Carola of Saxony, Queen Stephanie of Portugal, King Carol I of Romania, and Princess Marie, Countess of Flanders. Her Serene Highness was also a third cousin of Emperor Napoléon III of the French.

The Hungarian princess had begun life as Lady Mary Victoria Douglas-Hamilton: she was born at the family home, Hamilton Palace, in Lanarkshire, Scotland, on 11 December 1850 as the daughter of William Hamilton, 11th Duke of Hamilton (1811-1863), and Princess Marie Amélie of Baden (1817-1888), who had wed in 1843. Mary Victoria followed two brothers: William Douglas-Hamilton, eventual 12th Duke of Hamilton (1845-1895), and Charles Douglas-Hamilton, 7th Earl of Selkirk (1847-1886). Mary's paternal grandparents were Alexander Hamilton, 10th Duke of Hamilton (1767-1852), and Susan Euphemia Beckford (1786-1859); her maternal grandparents were Grand Duke Karl of Baden (1786-1818) and Stéphanie de Beauharnais (1789-1860), a second cousin to Eugène de Beauharnais and Hortense de Beauharnais, the stepchildren of Emperor Napoléon I of the French.

On 21 September 1869, Lady Mary Douglas-Hamilton married Hereditary Prince Albert of Monaco (1848-1922) at the Château de Marchais, a Grimaldi residence in France. The pair had met for the first time a month before, in August 1869, when they attended a ball hosted by Emperor Napoléon III and Empress Eugénie in Paris. A strictly arranged union, the couple were matched together by the groom's grandmother Marie Caroline Gibert de Lametz (1793-1879), a former French actress and the wife of Prince Florestan I of Monaco (1785-1856) as well as mother of Prince Charles III of Monaco (1818-1889), father of Prince Albert.

Albert and Mary of Monaco produced their only child, a son and heir, the year after their marriage. Prince Louis of Monaco was born on 12 July 1870 at Baden, in the grand duchy from which his maternal grandmother hailed. The marital bonds between Albert and Mary were tenuous, and did not last. The Scottish-born princess was not fond of the Mediterranean climate or the Monegasque court, and Albert had a tendency to be cold and distant: this resulted in Mary leaving Monte Carlo and the principality permanently not long after her son was born. The union of the Hereditary Prince and Princess of Monaco was annulled in 1880 following a long separation.

After the annulment was granted, Mary swiftly remarried to Hungarian nobleman Count Tasziló Festetics von Tolna (1850-1933). Prince Louis of Monaco was raised in Baden by his maternal grandmother and did not see his father until he was eleven years-old. At that point in time, Louis returned to Monaco to be trained for his future royal duties. The future Louis II of Monaco was joined by four half-siblings: Mária Matild (1881-1953), György (1882-1941), Alexandra Olga (1884-1963), and Karola (1888-1951). Tasziló was created Prince Festetics von Tolna in 1911 by Emperor Franz Joseph of Austria-Hungary.

On 26 June 1922, Prince Albert I of Monaco, the ex-husband of the late Princess of Festetics von Tolna, died one month after his first wife. Albert was succeeded by the couple's only child as Prince Louis II of Monaco. Louis II reigned until 1949, when he passed away at Monte Carlo at the age of seventy-eight on 9 May 1949. Prince Louis was succeeded by his only grandson, Prince Rainier III (1923-2005), who was the child of Louis' legitimised daughter Princess Charlotte (1898-1977) and her former husband Count Pierre de Polignac (1895-1964).

Through her first marriage, Lady Mary Hamilton-Douglas is the great-great-grandmother of Prince Albert II of Monaco (b.1958). Through her second marriage, Mary is the great-grandmother of fashion designer Prince Egon of Fürstenberg, socialite and actress Princess Ira of Fürstenberg and the Czech Minister of Foreign Affairs Prince Karel Schwarzenberg. Mary's second marriage was a happy one and lasted over forty years. Mary is buried beside her second husband Tasziló at the mausoleum of Festetics Palace.