The 77th Birthday of Princess Irene of Greece and Denmark

During the exile of the Greek royal family from their country during World War II, HRH Princess Irene of Greece and Denmark was born at Cape Town, South Africa, on 11 May 1942. Irene was the third child and second daughter of Crown Prince Paul of the Hellenes (1901-1964) and Crown Princess Frederica (1917-1981; née Hannover), who wed in 1938. The princess joined an elder sister, Sophia (b.1938), and an elder brother, Constantine (b.1940). Irene's godfather was Field Marshal Jan Christiaan Smuts (1870-1950), the 2nd Prime Minister of South Africa. In 1946, the Greek royals returned to their country - Irene's uncle was King George II of the Hellenes.

During her formative years, Princess Irene was a pupil of the concert pianist Gina Bachauer. Afterwards, the princess performed as a professional concert pianist herself.

In the wake of the flight of the Greek royals in 1967, Irene followed her brother Constantine and sister-in-law Anne-Marie into exile in Rome. They were accompanied by their mother, Frederica, who had become a polarising figure in Greece owing to her German birth. The royal family resided in a villa near Rome.

At some point in the late 1960s, Princess Irene was in a relationship with Prince Michel d'Orléans (b.1941), one of the twin sons of the Count and Countess of Paris. This romance ended when Michel wed Béatrice Marie Pasquier de Franclieu in 1967, much to his father's consternation. There was also some hope that Princess Irene would win the heart of Crown Prince Harald of Norway; yet, Harald was already firmly set on marrying his future bride Sonja. In later years, Irene found as a companion an equerry of her brother, King Constantine; the couple never married nor had issue.

After her brother Constantine lost his throne in 1973, Irene moved to India with her mother: the two were very much interested in Hindu philosophy. After Queen Frederica's death, Princess Irene has lived in Spain in an apartment at the Zarzuela Palace in Madrid, the royal residence of her sister and brother-in-law, King Juan Carlos I and Queen Sofía of Spain.


Together with her cousin Princess Tatiana Radziwill, Princess Irene is one of the closest confidantes of her sister, Queen Sofía of Spain. 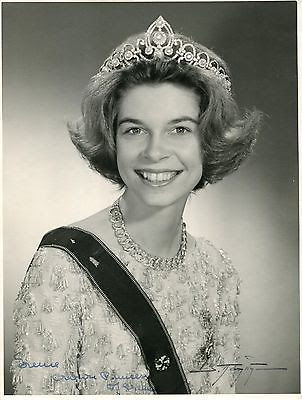