Constantine and Anne-Marie of Greece: A Love Story for the Ages

Yesterday, Queen Anne-Marie of Greece lost her husband and life partner of six decades. The love story between King Constantine II and Queen Anne-Marie is truly one of the most beautiful in modern times. 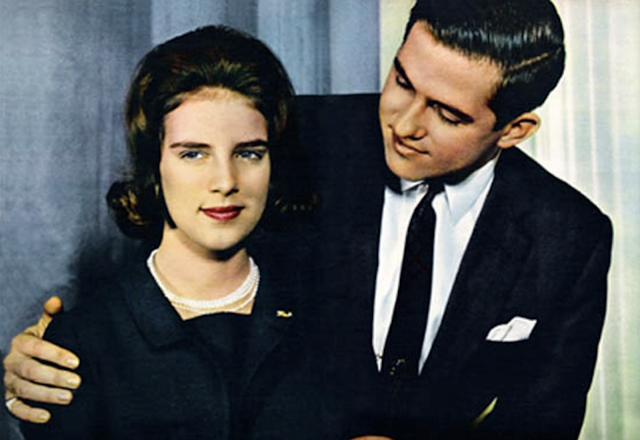 The eventual King Constantine II and Queen Anne-Marie of Greece first met during a visit of the Greek royal family, including then Crown Prince Constantine, to Denmark in 1959. Anne-Marie's father King Frederick took his daughter and eventual son-in-law, as well as other royal youngsters, to see the Benneweis Circus in Jutland. Constantine was the only son of King Paul I of Greece and Queen Frederica (née Princess of Hannover). Anne-Marie was the youngest daughter of King Frederick IX of Denmark and Queen Ingrid (née Princess of Sweden). 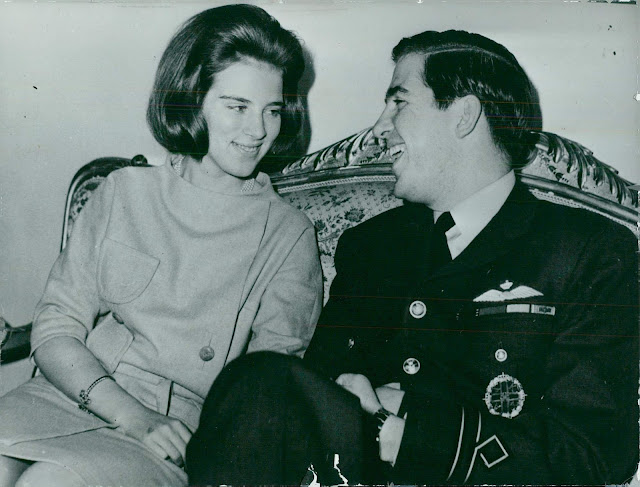 Constantine and Anne-Marie met again in 1961. The following year, 1962, Anne-Marie was a bridesmaid at the wedding of Constantine's older sister Sophia to Juan Carlos of Spain. Later that same year, Anne-Marie was on holiday with her governess in Norway, where  Constantine was attending a yacht racing event. He proposed and she accepted. They did not initially tell her parents. 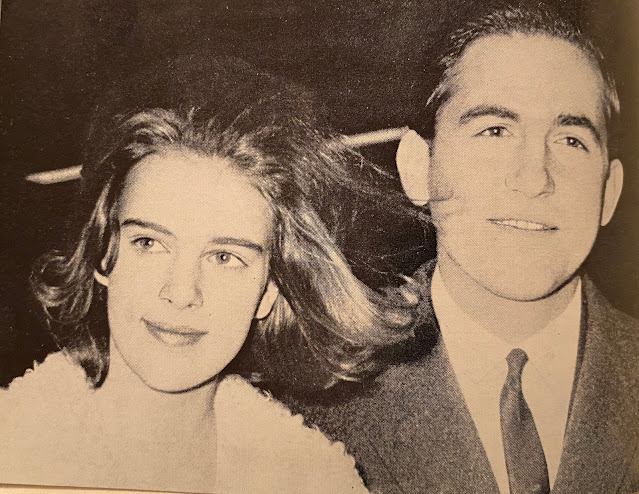 "The wedding of Sophie and Juan Carlos took place on May 14, 1962, and had even broader romantic consequences. The Crown Prince re-met his third cousin, the sixteen year-old Princess Anne-Marie. more than a hundred of Europe's royals attended the wedding, but Konstantine had eyes for no one else, and danced dance after dance with her, until his mother finally told him to give some of the other Princesses a break. Konstantine was having none of it, stating that he wanted no one else. Without telling his parents, Konstantine proposed to Anne-Marie during the summer of 1962 while they were all in Norway. She accepted, and the Prince immediately went and told his parents.

Several years before, while visiting Denmark, King Paul had also noticed the twelve-year-old Princess, and remarked to Frederika, 'She is like a butterfly. If and when he marries, I hope Konstantine marries her!'

While Frederika and Paul approved of the marriage, all was not so well in Denmark. Anne-Marie's father was delighted, but a number of legal questions were raised. Such a marriage would reunite the Danish and Greek Royal Houses. A hundred years before, the Danish Prince William, second in line to the Danish throne, had been elected King of the Hellenes as King George I. He had deferred his rights in the Danish succession to those of his younger brothers, but he, and his descendants, were still styled Princes of Denmark. Besides the close blood relationship, Danish law did not allow a girl to marry until she attained the age of eighteen. In order to marry, Anne-Marie required a letter of permission from her father, King Frederick IX, which also had to be approved by his Minister of Justice. Circumstances made this unnecessary. The death of King Paul required waiting through a period of mourning, and by the time the date was set, Anne-Marie was eighteen.

For six months the engagement had to be kept secret, much to the anguish of the Crown Prince, who lamented that it was '...unfair, since most engaged couples can see each other as often as they wish, while I have to sneak around, pretending that I am going to Denmark for the sailing.'"

The royal couple recounted their courtship in the Danish documentary A Royal Family.

King Constantine: "I actually saw a picture of her in a magazine. And I said: 'That's it.' And I said: 'Well, I want to go to Denmark and meet her.' And my father said: 'How are you going to do that?' And I said: 'Well, I'll write a letter to the king and say I'm going to be in Denmark for a sailing meeting with Mr. Paul Elvstrøm, which was feasible.' I don't know if I ever told Paul that I used him as an excuse to go see this girl."

Queen Anne-Marie: "We spent, whatever it was, four or five days in Athens for the wedding [of Princess Sophia of Greece and Infante Juan Carlos of Spain], which was a wonderful occasion. And I think probably there it was that we fell in love."

Queen Anne-Marie on their engagement: "I said: 'For goodness sake, do not not tell my parents, because they will have a fit!' Which he couldn't understand, but I persuaded him, and I think he realized that they probably would have had a fit. So it wasn't until, in fact, six months after we had got engaged unofficially that we did tell my parents."

King Constantine: "The biggest shock was for my father-in-law. I asked him if I could marry his daughter. And the poor man got such a shock that he got up, he never said a word to me, he just got up, took me by the hand, and put me in a room and locked me in there with no lights. So I had to sort of grope around to find a light, and then I found the light and opened it, and I found out I was in his toilet. And I couldn't understand what I was doing in there. And he had gone off to find his wife and tell her 'this fellow wants to marry our daughter - what do we do with him?'"

The engagement of Crown Prince Constantine of Greece and Princess Anne-Marie of Denmark was officially announced on 23 January 1963 by the Danish and Greek courts. A friend of the princess was quoted by the press: "She is the charmer and humorist of the Royal Family. Life is always fun when she is around."

King Constantine II of the Hellenes and Princess Anne-Marie of Denmark were married on 18 September 1964 at the Metropolitan Cathedral of Athens.

The King and Queen of Greece were married for fifty-nine years. On 18 September 2014, they celebrated their Golden Wedding Anniversary with a dinner at the Yacht Club of Greece. Following are the remarks that King Constantine gave to those gathered to join the couple in commemorating their fifty years of marriage.

Twenty-five years ago, most of you came to Denmark to celebrate our Silver Wedding anniversary. I cannot forget that I had then invited you to come in another 25 years. I then turned to my wife and said- let’s go for gold! Some of us have survived.

When I plucked up the courage to ask the late King of Denmark permission to marry his daughter, little did I expect that I would end up being locked up in his toilet. He walked off with the key to find my future mother-in-law. She gently asked him- where is he? He told her that I was locked up in the toilet.. She suggested that I be released and that he should order some champagne. When they both gave me their consent, my parents were invited to Denmark and we made the official announcement.

50 years ago, I had fallen in love with, -in my opinion-, the most beautiful girl in the world. 50 years later, I still have the same feeling.

She was also responsible for bringing up five wonderful children, whom we both love and are very proud of. Three of them married into our Family exceptional young people.

She turned out to be the most unselfish and patient human being and the Greek people took her to their hearts, where she remains ever since. That made me very happy and proud.

Those days were also very difficult because of the tension between our neighbours and our country, and also the turbulent politics of those days. I would not be able to go through that period without my young wife at my side.

After I tried to restore democracy in the country and we went to Rome on the 13th December 1967, we also suffered a very personal loss, -the loss of a baby.

This morning the Queen and I went to the Mitropolis, just as we had done 50 years ago. We were greeted by His Eminence the Archbishop of Athens and All of Greece, Mr. Ieronimos, who prayed for the health and well-being of our Family.

The Queen and I made a special prayer for our nation and the Greek people.

I thank you all for being with us tonight and hope to see you here in another 25 years!

It is astonishing to think that 50 years have gone by since that beautiful day in Athens.

We found strength in each other. We encouraged and helped each other.

We were incredibly blessed to have our five wonderful children. You in turn have given us nine grandchildren -and counting?

The happiness you have given us is indescribable. We looked after you and worried about you when you were little.

Now the roles are somewhat changing. You look out for Papa and me and help us. Mind you, we still worry about you!

You have encouraged us to start our life again in this heavenly country. It really is the most beautiful country on earth.

We did come home after all these years, as we knew we always would.

And we are so happy. 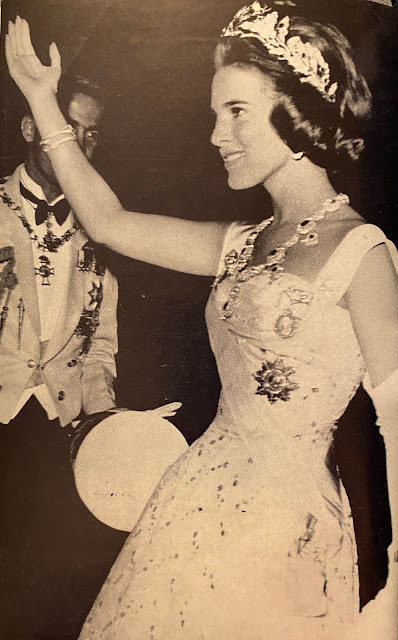 Our condolences to Her Majesty Queen Anna-Maria of the Hellenes.
Posted by Seth B. Leonard at 7:00 AM