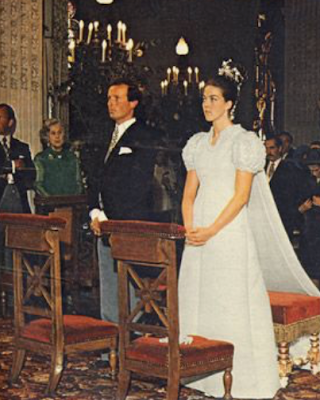 In 1971, Princess Chantal d'Orléans (b.1946), the youngest daughter of the Count and Countess of Paris, became engaged to François-Xavier de Sambucy de Sorgue (b.1943), a member of a noble family originally from Bologna, Italy. The Sambucy de Sorgues established themselves in Rouergue in the XIV century. The family also had contact with the Orléans as François-Xavier's great-uncle, Father Gaston de Sambucy de Sorgue, was the priest who officiated over the burial ceremony, in the Royal Chapel at St Louis de Dreux, for the Duchess d'Orléans, King Louis-Philippe's mother. François-Xavier and Chantal were married at the Royal Chapel at Dreux on 28 July 1972. She wore a splendid wedding gown designed by renowned couturier Balmain, as well as a diadem by Mellerio, a gift from her in-laws.
The couple have three children: Axel (b.1976), Alexandre (b.1978), and Kildine (b.1979).
Posted by Seth B. Leonard at 7:00 AM