Ivaylo Schalafoff, the Executive Director of the King Boris and Queen Giovanna Royal Heritage Fund, has announced that Duke Eugen of Württemberg died this afternoon (26 July), aged ninety-one. Eugen was a first cousin of the late Duke Carl of Württemberg, the Head of the Royal House, as well as first cousin of King Simeon II of Bulgaria.

On 2 November 1930, Duke Eugen Eberhard Albrecht Maria Joseph Ivan Rilsky Robert Ulrich Philipp Odo Carl Hubert of Württemberg was born at Karlsruhe. Eugen was the third child and second son of Duke Albrecht Eugen of Württemberg (1895-1954) and Princess Nadejda of Bulgaria (1899-1958), who married in 1924. Eugen joined two older siblings, and was followed by two younger siblings: Duke Ferdinand (1927-2020), Duchess Margarethe (1928-2017; married to François Luce de Chevigny), Duke Alexander (b.1933), and Duchess Sophie (b.1937; married and divorced Antonio Manuel Rôxo de Ramos-Bandeira). The family became known as the "Black Württembergs" as the children of Albrecht Eugen and Nadejda all had dark hair, which put them in contrast with their first cousins, the children of Albrecht Eugen's brother Philipp.


Eugen's paternal grandparents were Duke Albrecht of Württemberg (1865-1939) and Archduchess Margarete Sophie of Austria (1870-1902). The duke's maternal grandparents were King Ferdinand of Bulgaria (1861-1948) and Princess Marie Louise of Bourbon-Parma (1870-1899).
Duke Eugen worked as a banker and he lived in Frankfurt.
On 31 August 1962 at Mondsee, Duke Eugen of Württemberg civilly married Archduchess Alexandra of Austria (b.1935), a daughter of Archduke Anton of Austria and Princess Ileana of Romania. The couple's religious wedding followed on 3 September 1962. Eugen and Alexandra did not have children, and the pair's union was dissolved by divorce on 6 April 1972 at Frankfurt. The Holy See annulled their marriage on 7 November 1973. 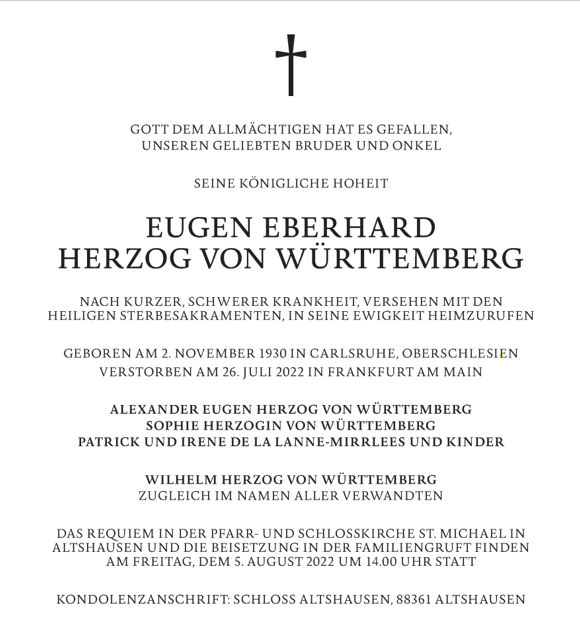 May the Duke Rest In Peace.
Posted by Seth B. Leonard at 6:07 PM