The Family of Countess Elinka von Einsiedel, Grandmother of Princess Tatiana of Greece

Margot von Gans had been previously married. In 1917, when she was eighteen, Margot wed Baron Werner von Bischoffshausen (1894–1970). The couple had one son, Baron Claus-Henning von Bischoffshausen (1919-killed in action 1942). Margot and Werner divorced in 1921. After her parting from Count von Eisiedel, Margot von Gans remarried once more. In 1947, Margot wed Harold Edwin Rydon (1890–1970). After being widowed, Margot moved to Denmark, where she passed away in 1984. 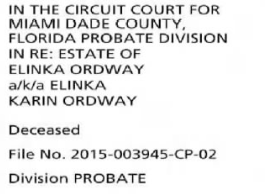 Countess Elinka von Einsiedel, Mrs. Peter Ordway, died in late 2015. Elinka was survived by her son Peter Bierlein and her daughter Marie Blanche Bierlein Brillembourg; and by her grandchildren Boris A. Blatnik (b.1978), Princess Tatiana of Greece and Denmark (b.1980), and Elinka Ordway Pardo (b.2002).