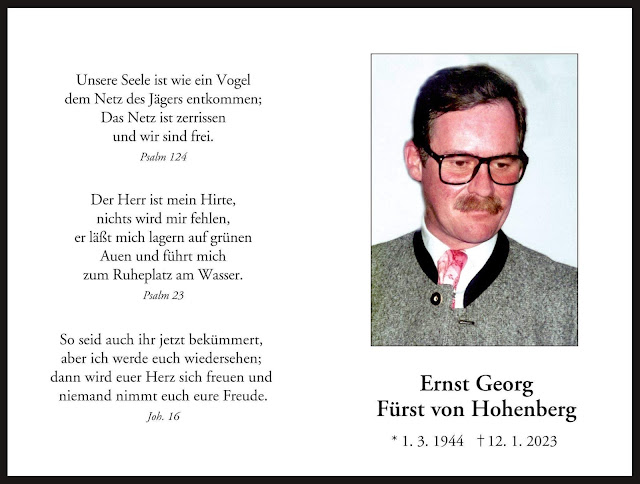 The paternal grandparents of Ernst were Archduke Franz Ferdinand of Austria (1863-1914) and Duchess Sophie von Hohenberg (1868-1914; née Countess Chotek von Chotkow und Wognin). As is well known, the assassination of Franz Ferdinand, then heir to the Austro-Hungarian Empire, and Sophie on 28 June 1914 in Sarajevo was the catalyst that led to World War I. The maternal grandparents of Ernst were Captain George Jervis Wood (1887-1958) and Baroness Rosa Lónyay de Nagy-Lónya et Vásáros-Namény (1888-1971).

On 31 August 1973 at Radmer, Fürst Ernst von Hohenberg married Patricia Annette Caesar (b.1950), the daughter of Arthur M. Caesar and Selma Anne Maguire. Ernst and Patricia celebrated their religious marriage on 2 September 1973. The next year, the couple welcome the birth of their only child, Fürstin Eva Anne Marie von Hohenberg, on 1 December 1974 at Graz. Fürst Ernst and Fürstin Patricia divorced in 1999. Their daughter Furstin Eva married Alessandro Geromella in 2005; the pair divorced in 2008. Eva is now happily engaged to Peter Eduard Meier. In 2007, Fürst Ernst remarried to Margareta Anna Ndisi (b.1959).

Since 1976 until his passing, Fürst Ernst resided in the hunting castle at Radmer in Styria, Austria. 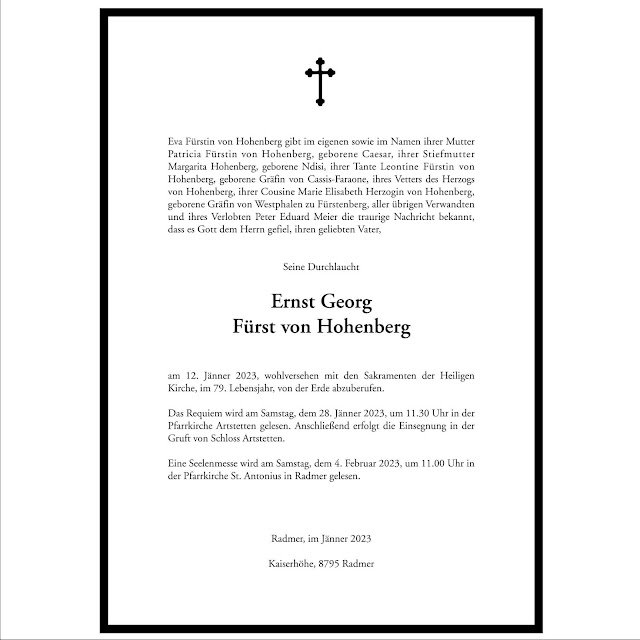