On This Day in 2011: The Passing of the Princess Mother of Brazil 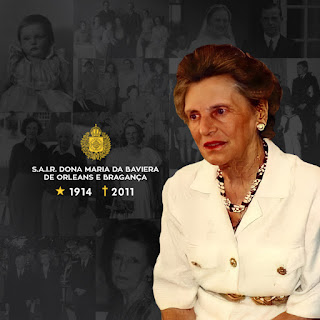 A decade ago, on 13 May 2011, Princess Maria of Bavaria, Princess Mother of Brazil, died at her home in Rio de Janeiro. She was ninety-six years-old. The princess passed away on the 123rd anniversary of the 1888 signing of the Lei Áurea (Golden Law) by Princess Imperial Isabel of Brazil, the grandmother of Princess Maria's husband Prince Pedro Henrique.

Princess Maria Elisabeth Franziska Theresia Josepha of Bavaria was born on 9 September 1914 at Schloß Nymphenburg in Munich. Maria was the second of the six children of Prince Franz of Bavaria and his wife Princess Isabelle von Croÿ. Maria's paternal grandfather was King Ludwig III of Bavaria, the last Wittelsbach monarch, during whose reign she was born.

After the fall of the Bavarian monarchy in 1918 following World War II, Maria's family went into exile in Hungary. They resided there until the 1930s when they returned to Bavaria, where they remained popular with the Bavarian people. Princess Maria received a thorough education; in addition to German, she became fluent in English and French. She also was trained in the art of porcelain painting.

On 19 August 1937, Princess Maria of Bavaria married Prince Pedro Henrique of Orleans and Bragança, Head of the Imperial House of Brazil. The wedding took place at in the chapel of Schloß Nymphenburg. Among the guests were King Alfonso XIII of Spain, Grand Duchess Charlotte of Luxembourg, and the Count and Countess of Paris.

Between 1938 and 1959, Princess Maria and Prince Pedro Henrique had twelve children who survived into adulthood. Their thirteenth child, a daughter, died shortly after birth in 1946.

In 1957, Prince Pedro Henrique and Princess Maria and their family moved to the Fazenda Santa Maria in Jundiaí do Sul, Paraná. In 1965, the couple relocated to Vassouras, where they resided at the Sítio Santa Maria.

Princess Maria became a widow when her husband Prince Pedro Henrique of Orleans and Bragança died on 5 July 1981. The prince was seventy-one years-old. He was succeeded as the Head of the Imperial House of Brazil by his eldest son Prince Luiz.

In her later years, Princess Maria lived between Vassouras and an apartment in Rio de Janeiro.