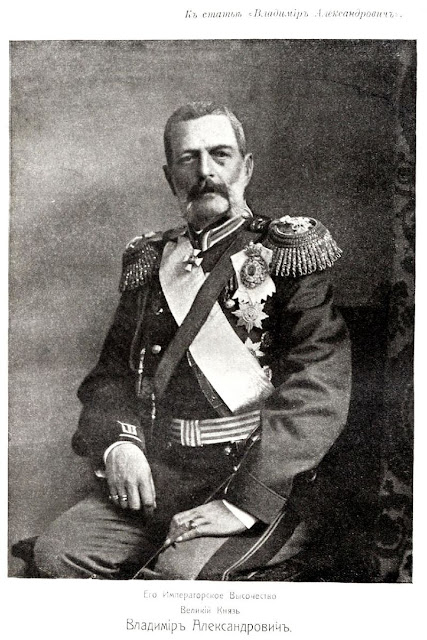 At the end of January 1905, Grand Duke Vladimir Alexandrovich of Russia granted a rare interview to a foreign reporter about the situation in Russia. The uncle of Tsar Nicholas II, fifty-seven year-old Grand Duke Vladimir, the Military Governor of Saint Petersburg, spoke candidly about the events of 22 January 1905 (O.S. 9 January), which have become known to history as "Bloody Sunday." It was noted that Grand Duke Vladimir "is big-framed and dark-visaged, has iron grey hair, and resembles more his brother, Emperor Alexander III, than his nephew, Emperor Nicholas II. Although his face and frame show marks of recent illness, the nervous energy he displays gives the impression of a man of force and action." The interview took place at the residence of the grand duke in Saint Petersburg.

Grand Duke Vladimir: "You must remember I am a grand duke and subject of the Emperor. As such I am extremely loyal to him and I am Russian from the crown of my head to the tip of my toes. What information can I give you?"

Correspondent: "The newspapers abroad have made many statements regarding the events of January 22."

Grand Duke Vladimir: "I know; I have read accounts in the foreign press. I have stood aghast at the frightful stories of the butchery of innocent people which they have printed. I know they say well-intentioned patriots with a priest at their head, coming peacefully to place their grievances before His Majesty were ruthlessly shot down in the streets, but we know that behind this peaceful procession was an anarchistic and socialistic plot of which the overwhelming majority of the workmen were merely innocent tools. We know from examination of the dead and those arrested that some alleged priests were actually revolutionary agitators and students in disguise.

We had to save the city from a mob. Unfortunately to do so innocent and guilty suffered alike. But suppose 140,000 men had reached the gates of the Winter Palace; they would have sacked it as the mob sacked Versailles. From the palace they would have gone elsewhere and the whole city would have been delivered over to anarchy, riot, bloodshed, and flames. Our duty was the duty of every government. The same situation has confronted cities in other countries.

Why, because this occurred in Russia, should the whole world point the finger of scorn upon us? In the midst of our difficulties why should we be turned upon? Why should America, especially, misinterpret and think ill of us? We have always been friends - friends of a century, friends when American needed friends. I remember when America was our great friend. Why has all this changed? What has Russia done to deserve it? What has Russia done to America?

Why should the foreign press, especially that of Great Britain, not hesitate before any calumny? No invention seems too horrible for them to print. They do not explain that on Saturday every available wall in Saint Petersburg was placarded with warnings to the people not to assemble. No; they tell that thousands of innocent people were killed and other thousands wounded and paint the streets as running red with blood. They even say the dead were pushed under the ice of the Neva at night. It is infamous.

They say nothing of isolated officers set upon by mobs in the streets and hammered into insensibility or of policemen killed or wounded.

As a matter of fact, complete returns show that exactly 126 are dead. Several hundred were wounded. I cannot give the precise figure of the wounded, but you shall have an opportunity to see the full reports."

Correspondent: "They say that Gorky will be hanged."

Correspondent: "It is asserted that some of the troops refused to obey commands."

Grand Duke Vladimir: "There is no question of the loyalty of the troops. They did their duty. They were ready, as I am ready, to die in the streets for the Emperor. A soldier was asked by one workman why he fired, the questioner saying to him, 'You will be a workman soon.' 'Perhaps,' he replied, 'then you may be a soldier and know what it is to obey your oath to do your duty to your Emperor.'"

Correspondent: "Might I ask Your Imperial Highness's view of the present situation?"

Grand Duke Vladimir: "With this unhappy war upon our shoulders we are passing through a crisis. I will not attempt to conceal it - it cannot be concealed - but, with the help of God, we will emerge from it as we have emerged from other troubles in the past. In the interior there are many elements of discord, but the situation is not so bad as it is painted. The disorders at Warsaw, Kiev, and elsewhere are largely industrial, produced by trade depression and consequent lack of employment on account of the war. They are not revolutionary at base.

People speak of a constitution. A constitution would mean the end of Russia, as the state would be gone, anarchy would supervene, and when it ended the empire would be disintegrated. Finland, Poland, and perhaps other frontier provinces would have broken away. Russia is not ripe for a constitution. Go out among the peasants, who compose the vast bulk of the Empire's population, and try to explain to them government by suffrage. The peasant knows nothing of government. He does not even know what the word means. He knows his Emperor. For him, the Emperor is everything. Give the peasant a vote, and all would be anarchy. Still, there is necessity for reforms, and they will be granted by the autocracy."

Correspondent: "Maintaining the principle of autocracy, then, the people will have an opportunity to be heard in the government?"

Grand Duke Vladimir: "Yes. They can, and I am sure they will be given a voice. Of that I am certain. They will be given the means of presenting their needs and grievances to the Sovereign."

______________
For further news and articles about Europe's imperial, royal, and noble families, join Eurohistory:
Subscribe to the European Royal History Journal!
Posted by Seth B. Leonard at 7:00 AM