In November, French journalist Frederic de Natal interviewed HRH Prince Davit Bagrationi of Georgia. Monsieur de Natal, who is a dear friend, has given me permission to post the English-language translation of his interview with the Head of the Royal House of Bagrationi. Frederic de Natal primarily focuses on news relating to the royal families of the world; he is the creator of the website Monarchies et Dynasties du Monde.

Frederic de Natal (FdN): "The Russian Revolution of 1917 forced your family into exile. You were born in Madrid, Spain, and lived there a large portion of your life. How did you experience this exile?"
Prince David: "Spain has always welcomed a large number of Royal Families from Eastern Europe. We will always be indebted to this wonderful country, whose people who have always treated us with great love and respect, whether they were monarchists or not. I retain a certain tenderness from my years of exile, which for me lasted twenty-seven years. I still have family and close friends there and I keep a special relationship with the country. In our sorrow for not having lived in our homeland, I must admit we were very fortunate."
---
FdN: "In 1995, Prince George Bagration, your father, returned to your country, Georgia. What kind of memories do you retain of your father?"
Prince David: "My father put his feet on Georgian soil for the first time in the early 1990s, after the fall of the Communist regime. He returned for the reburial of my great-grandparents, who had died in Spain. Today all three rest in the Royal Pantheon of Svetiskhoveli Cathedral, in Mtskheta, a town near Tbilisi. Twelve years after the death of my father, his spirit is still very close to me. He always held a deep love for Georgia. He was a true patriot, who was the head of our house for thirty-one years and who never let himself be influenced by the different political parties, including during the years of crisis and the civil war which broke out after Georgian independence. With the advice he gave me, I can keep my feet on the ground."
---
FdN: "You are today the legitimate heir to the throne of Georgia. What are your current activities as head of the Royal House?"
Prince David: "Georgia is now a presidential republic, which greatly limits my activities within the country. And yet, there is still a lot of work to be done. I am involved in charitable organizations and I am also involved in various environmental projects. I try to attract foreign investors in order to make Georgia internationally known by emphasising the history of its ancient dynasty: its culture, customs, and traditions."

---
FdN: "Like your father, you are passionate about motor racing. Is it a job you would have liked to pursue and why?"
Prince David: "Yes I am! Not only am I passionate about motor racing, but about in motorsports in general. When I was younger, I spent more time riding motorcycles and racing. I have learned a lot through motorsport. Things such as being serious, courageous, focused, disciplined, always remaining calm in extreme situations, making correct decisions in milliseconds - all which are essential elements to master the basics of this sport. In recent years, I have participated in thirty car races. In fact, last August I did an endurance race which consisted of crossing Georgia from the sea to the mountainous areas without setting foot at once. Three days of competition where I discovered young talents. I think this sport should be promoted by more institutions and business, it would allow Georgia to have a very positive impact abroad, much better than any of our current commercials. I find that sport is generally an excellent promotional tool for a country."
---
FdN: "In 2018, you were invited to attend the swearing-in of President Salome Zourabishvili. What is your current relationship with the Georgian government?"
Prince David: "This was an important ceremony, as the inauguration took place in the palace of the last king of Kartl-Kakheti in Telavi, an area in eastern Georgia internationally known for its wines. On several occasions in recent years, President Zourabishvili has spoken out in favor of the return of the monarchy. She understands the advantages Georgia could get from a possible replacement of the head of state by a constitutional monarch. The relationship that we [the Bagrationi dynasty] have with the government is excellent, and we hope that this positive dialogue will continue well into the future."
---
FdN: "Does the Royal House of Bagrationi enjoy a special status in Georgia like that one in Romania or Montenegro? If not, would you like to get a special status?"
Prince David: "Being able to live in our country is already a special status in itself. The royal house has not asked for favors from any Georgian government. But I would like a better supervision and a better protection of the historical heritage of my ancestors. It is always believed that when a royal house is overthrown, here in Georgia it was by a foreign country [Russia], then that dynasty has no longer has any rights. I deeply regret that some of the businessmen who live in our former properties use the history of my ancestors, including our coat of arms, for commercial purposes. I think this should be better regulated today."
---
FdN: "Legislative elections were held this month. Two monarchist movements participated in this election but achieved very poor results. How do you explain this when the polls about the monarchal restoration issue seem to be significantly growing?"
Prince David: "To tell you the truth, there are very few political parties in Georgia which are in favour of the reestablishment of the monarchy. I think we have to be very careful about this. I recall that kings are above parties, acting for the common good, far away from partisan and political quarrels."
---
FdN: "The Union of Georgian Traditionalists is the oldest monarchist movement and was founded by your grandfather, Prince Irakli, in 1939. Upon independence, the party lead the Supreme Council of the Republic of Georgia (1991-1992) before the beginning of the civil war. There were even talks of a possible restoration of the monarchy. Are you in contact with them?"
Prince David: "In the 1990s, it was a real political force. Today, they barely exceed the 1% mark in elections. I do not follow their activities closely, but I have maintained a friendship with one of the former member of the party."
---
FdN: "His Holiness Patriarch Ilia II, the highest religious authority in Georgia, has called many times for a return of the constitutional monarchy. Several political parties have expressed support for this initiative, but this issue divides Georgians. Do you think that the monarchy is the solution that will put an end to the crises which follow one by one in the country and which will achieve its unity? Which political parties today support the return of the monarchy?"
Prince David: "I have great respect and love for His Holiness Patriarch Ilia II. For many years, he said himself that he was in favour of a restoration, with all that that implies, and I am very grateful for his courage. Just as I am thankful for the advice that he has given me over the years. Some political parties have expressed their support, or pseudo-support, for the return of the monarchy, but an honest situation must be made of this issue. Indeed, I fear that some of these parties are using the idea of monarchy as a weapon in order to weaken their opponents, who do not hesitate to attack us. Others have wanted or are trying to circumvent the ancient rules of succession of our dynasty by proposing other pretenders to the throne."
---
FdN: "If tomorrow you were King of Georgia, what would be your first decisions?" 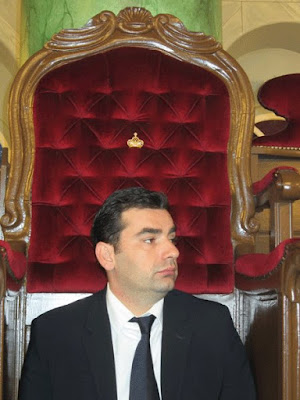 Prince David: "It is likely that I would seek to appoint a member of the House of Bagration in Georgia to succeed me at some point, Orthodox, who meets the dynastic rules of succession, who would be independent and who would have the strength to meet such a daunting task as being a ruler."
---
FdN: "It was Russia that ended the independence of the Kingdom of Georgia in 1812 and annexed the country into the Russian empire. This dominance lasted until the fall of the Soviet Union. In 2008, Russia briefly invaded Georgia. What were your feelings at that time?"
Prince David: "In these times of war, you understand what barbarism means. It is also the symbol of man's fallen nature as a human being. No one truly emerges from deadly conflicts as victorious. We realise what the word 'peace' means, and we understood it even more in this specific case. We have succeeded in favouring dialogue carried out in mutual respect. You know, no matter how diverse everyone thinks in this kind of context, we always have to find a way to avoid confrontation and even more so when armed conflict takes place."
---
FdN: "According to you, religion cannot be separated from the monarchy and still be the cement of the Georgian nation?"
Prince David: "Without a doubt! The Georgian kings and the Patriarchs who have succeeded one another have always been in perfect harmony for a thousand years. In fact, some of my ancestors were also Patriarchs of Georgia. I remain convinced that our religion is a source of unity for all Georgians."
+++++++ 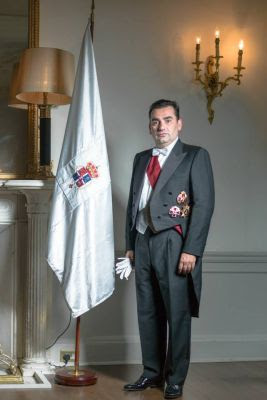 Born at Madrid on 24 June 1976, Prince Davit Bagrationi is the son of Prince George Bagrationi (1944-2008) and his first wife doña María de las Mercedes de Zornoza y Ponce de León (1942-2020). Through his father, the prince is a cousin of Grand Duchess Maria Vladimirovna of Russia, the Head of the Imperial House of Romanov. In 2009, Prince Davit married Princess Anna Bagrationi; the couple had one son, Prince Giorgi (b.2011). Prince Davit Bagrationi, who lives in Georgia, is the Grand Master Grand Collar of the Order of the Eagle of Georgia.
______________
For further news and articles about Europe's imperial, royal, and noble families, join Eurohistory:
Subscribe to the European Royal History Journal!
Posted by Seth B. Leonard at 7:00 AM