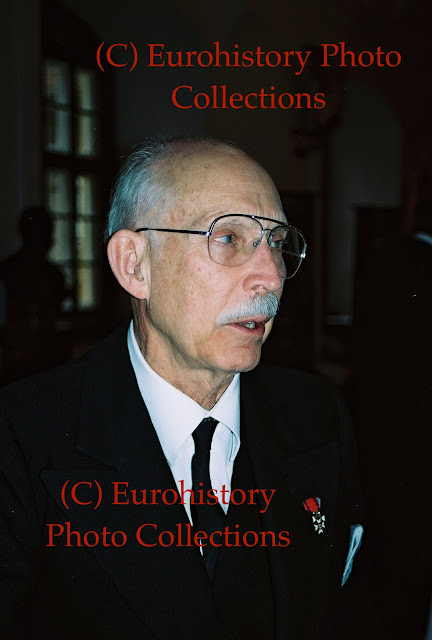 
On 3 April 1925, HRH Duke Ferdinand Eugen Albrecht Maria Joseph Ivan Rilsky Philipp August Clemens Karl Robert Ludwig Boris Cyrill Franz de Paula of Württemberg was born at Karlsruhe.  Ferdinand was the first child of Duke Albrecht Eugen of Württemberg (1895-1954) and Princess Nadejda of Bulgaria (1899-1958), who married in 1924. Ferdinand was joined by four younger siblings: Duchess Margarethe (1928-2017; married to François Luce de Chevigny), Duke Eugen Eberhard (b.1930; married and divorced Archduchess Alexandra of Austria-Tuscany), Duke Alexander (b.1933), and Duchess Sophie (b.1937; married and divorced Antonio Manuel Rôxo de Ramos-Bandeira). The family became known as the "Black Württembergs" as the children of Albrecht Eugen and Nadejda all had dark hair, which put them in contrast with their first cousins, the children of Albrecht Eugen's brother Philipp.


Ferdinand Eugen spent his childhood and youth in Carlsruhe and at Lindach Castle. He attended a grammar school in St Gallen and secondary schools in Ettal and Munich. For political reasons he was declared unworthy of military service in 1943. In 1944, he received a diploma and was obliged to work. Afterward, he attended further secondary school in Schwäbisch Gmünd and graduated from there in 1946. Ferdinand Eugen studied forestry at the University of Freiburg im Breisgau and graduated as a forester. He held a keen interest in botany and photography.

Ferdinand of Württemberg had a long career as a forestry engineer. He never married and had no children. Ferdinand was sixth in line to the Headship of the Royal House of Württemberg at the time of his death. The duke lived at Friedrichshafen.

The funeral of the duke is expected to take place at Schloß Altshausen, the ancestral home of the Dukes of Württemberg. A date has will be announced in time.
May His Royal Highness Rest In Peace.
______________
For further news and articles about Europe's imperial, royal, and noble families, join Eurohistory:
Subscribe to the European Royal History Journal!
Posted by Seth B. Leonard at 11:42 AM