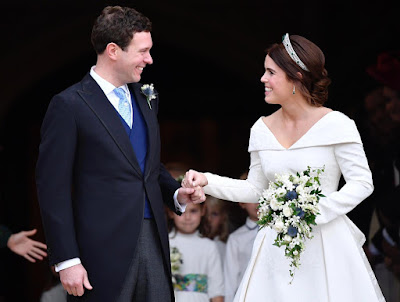 Earlier today, the British Royal Family released the following statement which let it be known that Princess Eugenie and Jack Brooksbank are expecting their first child:

Her Royal Highness Princess Eugenie and Mr Jack Brooksbank are very pleased to announce that they are expecting a baby in early 2021.

The Duke of York and Sarah, Duchess of York, Mr and Mrs George Brooksbank, The Queen and The Duke of Edinburgh are delighted with the news.

View this post on Instagram
I am so excited by the news that Eugenie and Jack are expecting their first child. Thrilled for them both and in my 60th year cannot wait to be a grandmother. Welcoming a new baby into the York family is going to be a moment of profound joy
A post shared by Sarah Ferguson (@sarahferguson15) on Sep 25, 2020 at 5:04am PDT

This will be the first grandchild for the Duke of York and Sarah, Duchess of York. Eugenie and Jack live at Ivy Cottage, a house on the grounds of Kensington Palace. The princess and her husband were married on 12 October 2018.
Posted by Seth B. Leonard at 9:36 AM