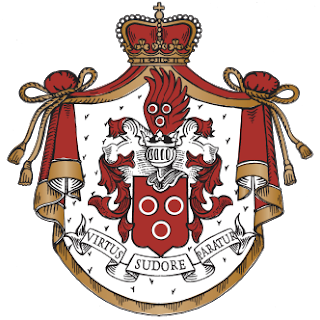 Count Josef Hubert von Neipperg, Head of House, passed away on September 12, 2020. At his death, he was the longest-living male member of a Mediatized Dynasty. 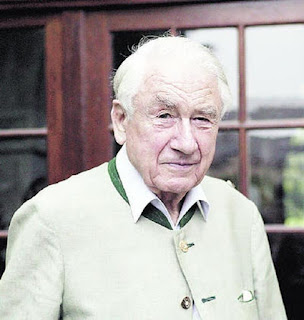 The late Count Josef Hubert von Neipperg.
(1918-2020)
Born in Schwaigern, seat off the family, on July 22, 1918, he was the son second son Count Anton Ernst (1883-1947) and of his wife, the former Countess Anna von Silva-Tarouca (1888-1971). Josef Hubert's paternal grandparents were: Count Reinhard (1856-1919) and his wife, the former Countess Gabrielle von Waldstein. In turn Count Reinhard's parents were Count Erwin (1813-1897) and his wife, the former Countess Henriette von Waldstein. Erwin's parents were Adam Albert (1775-1829), Count von Neipperg, and his first wife Countess Theresia von Pola (1778-1815). Interestingly, Adam Albert's second wife was Empress Marie Louise, second wife of Emperor Napoleon. With her, Adam Albert founded the line of the Princes of Montenuovo.
As his older brother Count Karl Reinhard (1915-1941) died in action in WWII, Josef Hubert succeeded their father as Head of House. Two years after succeeding to the title, Josef Hubert married Countess Maria von Ledeburg-Wicheln (1920-1984). The couple had seven children, including Count Karl Eugen (b. 1951), who in 1977, at Pöcking, married Archduchess Andrea of Austria (b. 1953), eldest daughter of Archduke Otto of Austria and of his wife, the former Princess Rehgina of Saxe-Meiningen. Karl Eugen has now succeeded as Head of House Neipperg.
Having lost his wife in 1984, two years later Josef Hubert married Prtincess Theresa of Hohenlohe-Waldenburg-Schillingsfurst (b. 1938). She survives her husband and joins the family in announcing the sad passing of her beloved husband. 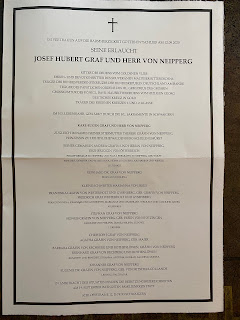 A prominent member of the German Gotha described him as, "an extremely educated and humorous man."
His funeral will take place in privacy on September 19, 2020.
May He Rest In Peace...
For further reading on the late Count of Neipperg, visit Eurohistory's report on his 102nd birthday, this past July!
http://eurohistoryjournal.blogspot.com/2020/07/the-oldest-living-male-member-of.html

Posted by Arturo Beéche at 5:30 PM