Centennial of the Death of Grand Duchess Marie Pavlovna Sr.

Centennial of the Death of Grand Duchess Marie Pavlovna Sr. 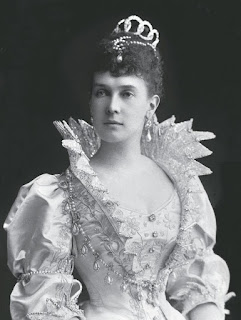 Born at Schloß Ludwigslust on May 14, 1854, as the daughter of Grand Duke Friedrich Franz II of Mecklenburg-Schwerin (1823-1883) and his first wife, the former Princess Auguste Reuß. In August 1874, Marie married Grand Duke Vladimir Alexandrovich (1847-1909) and adopted the Russian name "Marie Pavlovna."

During her marriage, Marie Pavlovna was one of the luminaries of Saint Petersburg society, perhaps its unrivaled leader. This position was one that she retained even after the death of her husband in 1909.

During the Great War, Marie Pavlovna directed several hospitals and gave her full support to bringing medical assistance to the Russian soldiery. Her hospital trains, which criss-crossed the front, were seen as a source of much relief and hope by those who were tended to in them. 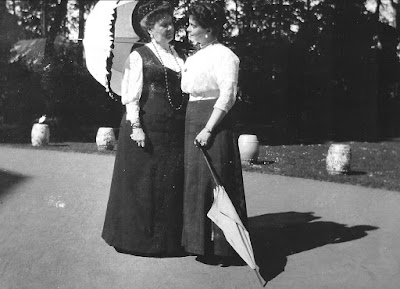 When revolution overthrew the Tsar, Marie Pavlovna retreated to Kislovodsk in the war-torn Caucasus. From there, still riding her private train wagon, she made it to Novorossiysk on the Black Sea Coast. En-route, she ran into her niece Olga Alexandrovna, who later described the experience: "Disregarding peril and hardship, she stubbornly kept all the trimmings of bygone splendor and glory. And somehow she carried it off..When even generals found themselves lucky to find a horse cart and an old nag to bring them to safety, Aunt Miechen made a long journey in her own train. It was battered all right ... but it was hers. Fort the first time in my life I found it a pleasure to kiss her..."

Eventually, she made it to Venice, from where she traveled to Switzerland, finally reaching her beloved French resort at Contrexéville. The she stayed at her villa, where surrounded by her family, she died on September 6, 1920.

She was laid to rest in a small chapel, which her descendants had restored a few years ago.

by Nicholas Nicholson for Eurohistory

As July drew to a close, Maria Pavlovna’s famous health and energy was beginning to leave her.  Alone in her rooms at the Hôtel la Souveraine, she began her decline.  Ducky and Kirill, who had been visiting with Queen Marie of Romania in Paris cut short their time to rush to her side at the once-fashionable Vosges resort. From Contréxeville, Ducky wrote her sister: “we found my mother-in-law in almost dying condition with an old ass of a Kurarzt[1] who has no notion what to do & a lady & gentleman at the end of their resources and the poor old lady crying in her bed for want of her family, feeling herself dying and deserted by all. She was so pleasant and touched that we came that it repays one for very much what one has been through. I cannot say if she will recover.  At moments one thinks there is but little hope, at other moments she rallies & talks but she is very weak, can take no food without hours of deadly sickness afterwards. They seem to think that one of her kidneys has … brought on a sort of blood poisoning. The old fool of a doctor here started her on the full cure[2]like in olden days which set all this matter in motion, causing an acute attack of the kidneys with excessive pain, followed by complete heart failure. The pulse almost stopped, and this off and on for nearly a week now.  We are awaiting your Doctor Abrams with greatest impatience.  One keeps her going with camphor injections but they make her suffer terribly. This is a medeavel [sic] place, awful bare little rooms & no food or things to be got in the house.  One has to send for everything… I never saw such an arrangement.”[3]  The Grand Duchess was dying slowly of a combination of heart and renal failure with nothing to relieve her pain.  She floated in and out of consciousness for weeks as her family gathered by her side.  Boris arrived in early August and was followed by Andrei and Ellen. 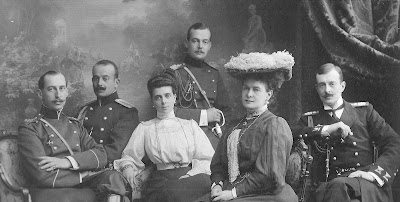 Ellen wrote later to her mother’s old friend Princess Galitzine: “It was épouvantable for several days, but then she at last seemed at some peace -- sometimes calling out for Papa Wladimir! In a weak voice. There were a few days when she seemed almost well, but then on the last day it was a great struggle until at last she slept deeply, and the end came.”[4]  Ducky wrote Missy: “…Aunt Miechen died, repentant like one only reads in books. Asking pardon all round for all the harm she had done, even blaming herself more than seemed necessary to me. She suffered inhumanely and only the last day was quite unconscious. The death struggle lasted 14 hours. I was really, really sad as she was more than nice & touching to me in the end. If she could have lived as she died, what invincible friends we would have been.”[5] 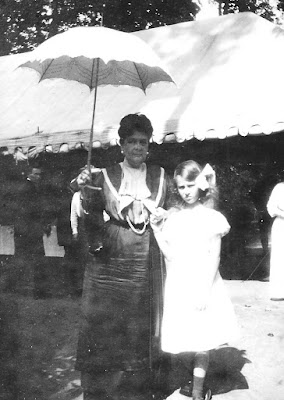 The funeral service was intimate and held in the tiny chapel of Sts. Vladimir and Mary Magdalene which she had built in 1909 to commemorate the death of her husband and her own conversion to the Orthodox faith. The “Grandest” of the Grand Duchesses, Maria Pavlovna was the last Romanov to leave Russia, and the first to die in exile.  Buried in a simple white marble sarcophagus as she would have been in Russia, outside the chapel a sign reads : “In this chapel raised by her own hands lies H.I.H. the Grand Duchess Wladimir, died at Contrexéville 6 September 1920.”
[1] A Spa physician
[2] Hot spa treatments, mineral waters, and enemas.
[3] Fond Regina Maria: Dos V/3393/1920, Royal Archives Bucharest; John Wimbles Papers, Archivio Orléans-Borbón, Sanlucar de Barrmeda, Spain.
[4] Princess Nicholas of Greece to Pcess Galitzine, 10 Sept 1920, private collection, USA.
[5] Fond Regina Maria: Dos V/3395/1920, Wimbles, op cit.
Posted by Arturo Beéche at 12:33 PM