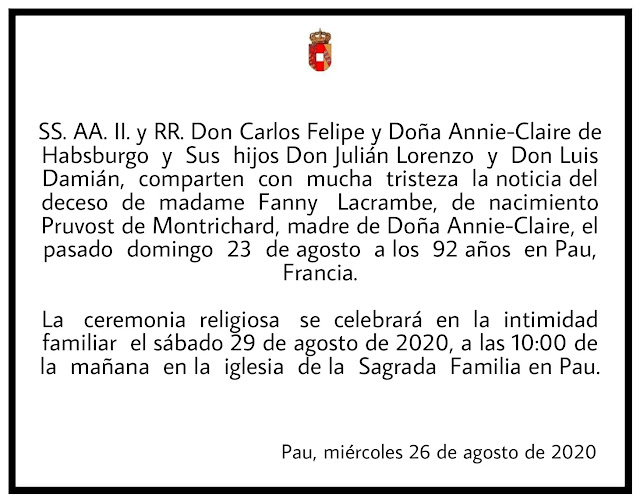 The religious ceremony will be held in the strictest intimacy on Saturday, 29 August 2020, at 10:00am at the Church of Saint Thérèse in Pau. Madame Lacrambe's husband Dr. Henri Lacrambe died in 2013.

Annie-Claire Christine Lacrambe was born on 15 February 1959 at Pau, Pyrénées-Atlantiques, France. She was the only daughter of Dr. Henri Gustave Lacrambe (1932-2 February 2013) and Fanny Pruvost de Montrichard (1928-2020). Annie-Claire had one brother, Mr. Paul-Henri Lacrambe (d.October 2003). On 12 May 1998, Annie-Claire Lacrambe married Archduke Karl Philipp of Austria (b.Mexico City 18 October 1954), the son of Archduke Felix of Austria (1916-2011) and Archduchess Anna-Eugénie (1925-1997; née Arenberg). Annie-Claire's husband is a great-great-nephew of Emperor Maximilian I of Mexico and is the first male of the former ruling house to be born on Mexican soil. The couple have one son, Archduke Louis-Damian Henri Maria Marko d'Aviano Melchior of Austria (b.Montreal, Canada 23 September 1998). Archduke Karl Philipp was first married from 1994 until 1997 with Martina Donath (b.Vienna 18 Jun 1955), with whom he had one son, Archduke Julien Laurent Peter of Austria (b.Montreal 29 May 1994).

For several years, Archduke Carlos Felipe and Archduchess Annie-Claire have established themselves in Mexico City, where they function as representatives of the Imperial House of Habsburg in Mexico.

May Madame Lacrambe Rest In Peace.
Posted by Seth B. Leonard at 2:59 AM