Engagement of the Earl of Southesk, Future Duke of Fife 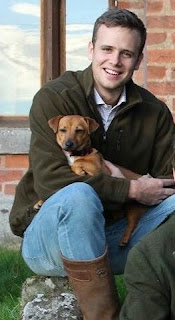 Yesterday The Times carried the announcement of the engagement of Charles "Charlie" Carnegie, Earl of Southesk, to Camille Ascoli. A further announcement appeared today in The Telegraph.

Camille Ascoli was born at Paris on 6 March 1990 as the daughter of Roberto Ascoli and Valérie Ledoux.

Charles Duff Carnegie, Earl of Southesk, was born on 8 October 1989 at Edinburgh. Charles is the eldest of the three sons of David, 4th Duke of Fife, and his wife Caroline (née Bunting). The Earl of Southesk is the great-grandson of Princess Maud of Fife (1893-1945), who herself was the daughter of Princess Louise (1867-1931), who was herself one of the daughters of King Edward VII and Queen Alexandra (née Denmark).

Many congratulations to the Earl of Southesk and Miss Ascoli!

https://eurohistoryjournal.blogspot.com/p/subscribe-to-eurohistory.html
Posted by Seth B. Leonard at 6:29 AM