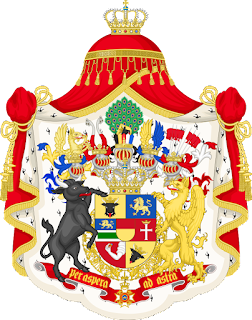 At the funeral of Princess Woizlawa-Feodora Reuß (née Mecklenburg-Schwerin; 1918-2019), there was an interesting family reunion that took place. Present at the celebration of the life of the princess were a number of relatives: Duke Borwin of Mecklenburg, and sisters Duchess Donata and Duchess Edwina of Mecklenburg-Schwerin. In addition, there was in attendance Frieda zu Mecklenburg, along with her son. References to Woizlawa-Feodora by Frieda indicated that the former was the latter's aunt. If this is the case, it would be a most fascinating genealogical discovery.

Frieda zu Mecklenburg was born at Lomé, Togo on 5 January 1955. From what one can gather, she is possibly a descendant, through the male line, of the Grand Ducal House of Mecklenburg-Schwerin. If this is true, then Frieda is a second cousin once-removed of Queen Margrethe II of Denmark, Grand Duchess Maria Vladimirovna of Russia, and Princess Beatrix of The Netherlands. Frieda zu Mecklenburg would also be a second cousin twice removed of Prince Georg Friedrich of Prussia, the grandson of Frieda's potential second cousin Prince Louis Ferdinand of Prussia, who married Grand Duchess Kira Kirillovna of Russia, the aunt of Grand Duchess Maria Vladimirovna.


Frieda's father appears to have been the natural or adopted son of Duke Adolf Friedrich of Mecklenburg-Schwerin (Schwerin, Mecklenburg-Schwerin 10 October 1873 - Eutin, West Germany 5 August 1969) and an as-yet-unknown Togolese woman. Adolf Friedrich was Governor of Togoland (in German West Africa) from 19 June 1912 until 31 August 1914. The duke was invited to the independence celebrations of Togo in 1960.


Duke Adolf Friedrich of Mecklenburg-Schwerin's possible granddaughter, Frieda, studied at the Collége Protestant Lomé in the early 1970s. In the 1980s, she attended the Institut Universitaire de Technologie de Bordeaux. Frieda zu Mecklenburg is an honorary member of the Société Allemande-Togolaise (SAT).

Note: The author of this post wishes to thank Hein Bruins (see here for his website) for his kind help in researching this topic.

https://eurohistoryjournal.blogspot.com/p/subscribe-to-eurohistory.html
Posted by Seth B. Leonard at 10:42 PM