It has been announced that Duke Ludwig of Württemberg, the elder brother of Duke Carl (Head of House), passed away on 6 October 2019. Ludwig was eighty-eight years-old. His death occurred at Weingarten.


Duke Ludwig of Württemberg was born on 23 October 1930 at Stuttgart as the second child and first son of Duke Philipp of Württemberg 1893-1975) and his second wife Archduchess Rosa of Austria-Tuscany (1906-1983). 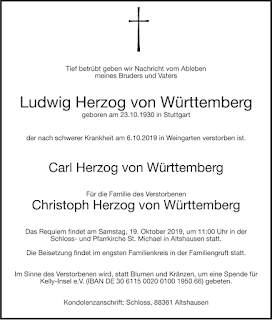 Ludwig worked as an interior designer. He is survived by his four children, and by his siblings: Princess Marie Christine of Liechtenstein; Margravine Helene Pallavicini; Princess Elisabeth of Bourbon-Two Sicilies; Princess Marie-Thérèse d’Orléans, Duchess of Montpensier; and Duke Carl of Württemberg. Ludwig was predeceased by his youngest sibling, Duchess Marie Antoinette.

A memorial service for Duke Ludwig will be held at Schloß Altshausen on 19 October.

https://eurohistoryjournal.blogspot.com/p/subscribe-to-eurohistory.html
Posted by Seth B. Leonard at 12:53 AM