Today, Countess Marianne Bernadotte marks her ninety-fifth birthday. Marianne is the widow of the late Prince Sigvard of Sweden (1907-2002; later Prince Bernadotte and Count of Wisborg), who she married in 1961. She was born Gullan Marianne Lindberg on 15 July 1924 at Helsingborg; her parents were Helge Lindberg and Thyra Dahlman. Marianne's brother Rune suffered from dyslexia, which led to Marianne becoming interested in the treatment of those with the reading disorder. Her marriage into to a member of the Swedish royal family led to a further advocacy in this area when she realised that her nephew King Carl XVI Gustaf and his children Crown Princess Victoria and Prince Carl Philip also deal with dyslexia.

Marianne Lindberg began her career as an actress in the theatre. She studied at the Royal Dramatic Theatre's acting school Dramatens elevskola, from which she graduated in 1948. In 1947, she married Gabriel "Toto" Anthoine Gustav Tchang (1919–1980), the son of a Chinese Ambassador in Stockholm. The couple had three children: Robert (1948-2012), Richard (1950-1952), and Marielle (b.1953). Marianne and Toto divorced in 1957. Marianne has become a champion for children having sufficient access to vision healthcare as a result of her second son, Richard, going blind before he died before reaching his second birthday. In this vein, Countess Marianne Bernadotte founded The Sigvard & Marianne Bernadotte Research Foundation For Children’s Eyecare in Sweden in 1990. The foundation now has an office in the United States as well.

On 30 July 1961, Marianne married Prince Sigvard Bernadotte (former Prince of Sweden) in a ceremony at Stockholm. Sigvard was the second son of the eventual King Gustaf VI Adolf of Sweden and his wife Princess Margaret (née Connaught/Great Britain). For Marianne, it was her third marriage; for Sigvard, it was his third. The couple remained together until Sigvard's death in 2002 at the age of ninety-four. 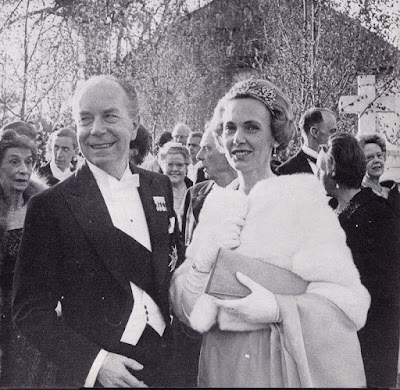 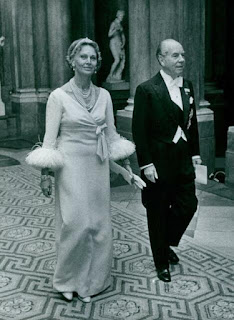 Countess Marianne Bernadotte and her husband Prince Sigvard met designer Pierre Balmain in 1962; this let to a lasting friendship between the countess and the French haute couturier, who often created outfits for Marianne. In 2017, the Stockholm art museum Millesgården held a four-month exhibition on the fashion of Countess Marianne Bernadotte: the exhibit was opened by her grandniece Crown Princess Victoria.

Although her husband Sigvard had a strained relationship with his family, his widow maintains close ties to King Carl Gustaf, Queen Silvia, and their children. Marianne attended the 2010 wedding of Crown Princess Victoria, the 2013 wedding of Princess Madeleine, and the 2015 wedding of Prince Carl Philip. Since the death of Countess Gunilla Bernadotte (widow of Count Carl Johan Bernadotte) in 2016, Marianne is the only surviving daughter-in-law of King Gustaf VI Adolf and the only surviving aunt of King Carl XVI Gustaf of Sweden.

We wish Countess Marianne Bernadotte good health and many happy returns of the day!

https://eurohistoryjournal.blogspot.com/p/subscribe-to-eurohistory.html
Posted by Seth B. Leonard at 5:50 PM