On This Day In History: The Death of Grand Duchess Leonida of Russia

On 23 May 2010, Grand Duchess Leonida Georgievna died at La Paz Hospital in Madrid. The grand duchess was ninety-five years-old. She was the last surviving member of the Imperial House of Romanov to have been born in the Russian Empire before its fall in 1917.

The website of the Russian Imperial House offered a detailed account of the last few days in the extraordinary life of Grand Duchess Leonida Georgievna:

On 21 May 2010, the grand duchess’s health began to deteriorate sharply. Doctors were summoned and were able to stop the heart attack; and on the following day, Her Imperial Highness was feeling somewhat better. But by evening, the pain and labored breathing had returned.

On 10/23 May, on the Feast Day of the Holy Trinity, Grand Duchess Maria Wladimirovna informed Fr. Andrei Kordochkin, the rector of the Church of the Nativity of Christ, a parish of the Moscow Patriarchate, of her most august mother’s illness. Fr. Andrei immediately arrived at the Imperial Family’s apartment and gave the grand duchess the Most Holy Mysteries of Christ, and read the Canon for the Departure of the Soul. In the evening, Her Imperial Highness was taken to “La Paz” hospital. At her side the entire time was Grand Duchess Maria Wladimirovna. At 11:55pm local time, the Dowager Grand Duchess Leonida Georgievna departed this life in the Lord.

News of the death of the senior member of the Russian Imperial House brought sorrow and expressions of sympathy from people all over the world. The first condolences received were from His Holiness, Patriarch Kirill of Moscow and All Russia:

It was with enormous sorrow that I learned of the death in the Lord of Her Imperial Highness, Grand Duchess Leonida Georgievna. She lived a full, long, and complex life. She confronted suffering in her life many times, and time has taken its toll, but through it all, she maintained a passionate love for Russia and for the traditions of Holy Orthodoxy.
We are grateful for her involvement in the life of the Church, both at home and abroad, and for her significant contributions to the reestablishment of the unity in the Church. Grand Duchess Leonida Georgievna maintained an active interest in affairs in Russia, and sincerely empathized with our sorrows and rejoiced in our successes.

I will always remember the times I met her, especially the first meeting, which took place in 1992 during the historic visit of the grand-ducal couple to St. Petersburg. I well remember also my last meeting with her, in Smolensk. Please accept my heartfelt condolences on this loss that has befallen you and your family.

May the Lord grant rest to his servant in the abodes of the righteous, and grant us all His all-mighty help in the service of the fatherland and its people. With respect,

+KIRILL, PATRIARCH OF MOSCOW AND ALL RUSSIA"

In the days after the death of the dowager grand duchess, condolences were received also from the Chair of the Office of External Church Relations, Metropolitan Hilarion of Volokolamsk; the First Hierarch of the Russia Orthodox Church Abroad, Metropolitan Hilarion of Eastern America and New York; Metropolitan Kornilii of Talliinn and All Estonia; Archbishop Vikentii of Ekaterinburg and Verkhoturia; Archbishop Aleksei of Kostroma and Galitsa, Archbishop Kirill of San Francisco and Western America; Archbishop Ionafan of Tulchyn and Bratslav; Archbishop Innokentii of Korsun; Metropolitan Polikarp of Spain and Portugal and Exarch of the Mediterranean; from King Juan-Carlos I of Spain and Queen Sofia; Queen Elizabeth II of Great Britain and North Ireland; King Albert II of the Belgians and Queen Paola; King Carl XVI Gustav of Sweden and Queen Silvia; Queen Beatrix of the Netherlands; Tsar Simeon II of Bulgaria and Tsaritsa Margarita; King Constantine II of Greece and Queen Anna-Maria; King Leka of Albania; the Head of the Yugoslavian Royal House Crown Prince Alexander Karageorgievich and Princess Catherine; the Head of the Austrian Imperial House, Archduke Otto; the Head of the German Imperial and Prussian Royal House, Prince Georg-Freidrich; the Head of the Bavarian Royal House, Duke Franz; the Head of the Portuguese Royal House, Dom Duarte, Duke of Braganza; the Head of the Georgian Royal House, Tsarevich David Georgievich; the Head of the Italian Royal House, Prince Victor-Emmanuel of Savoy; from the vice-chair of the State Duma of the Federal Assembly of the Russian Federation, L. K. Sliska; the Chairman of the Constitutional Court of the Russian Federation, V. D. Zor’kin; the Chair of the Supreme Court of the Russian Federation, V. M Lebedev; the Chairman of the Central Elections Commission, V. E. Churov; the governor of Tula District, V. D. Dudkin; the governor of Kemerovo District, A. I. Tuleev; the general director of the judicial department of the Supreme Court of the Russian Federation, A. V. Gusev; the vice-chair of the State Duma Committee for Transport, S. A. Gavrilov; from the President of the Transdnistria Moldovan Republic, I. N. Smirnov; the Minister of Culture of France, F. Mitterrand; from the great-great-grandson of Emperor Alexander III, P. E. Kulikovskii and his wife; from government and civic figures; representatives of the clergy; academic and cultural groups; from members of the Russian and European nobility; and from many countrymen, who have expressed their sincere feelings of support for the Imperial family at this difficult time of sorrow and loss.


Princess Leonida Georgievna Bagration-Mukhransky was born on 6 October 1914 at Tbilisi, Georgia. She descended from the oldest Christian royal family in the world: the Bagrationi of Georgia. Leonida's parents were Prince George Alexandrovich (1884-1957) and Princess Elena Sigismundovna (1886–1979; née Złotnicka-Nowina).


After the Russian Revolution, the family eventually made its way to France. It was there that Leonida met her first husband, American Woolsworth heir Sumner Moore Kirby (1895–1945). The couple were married at Nice on 6 November 1934. Leonida and Sumner had one daughter, Hélène Louise Kirby (b.Geneva 26 January 1935); the pair's union ended in divorce on 18 November 1937.

During World War II, Leonida met Grand Duke Vladimir Kirillovich of Russia in France at a café. The couple would not see each other again for a few years: their next meeting would take place in Spain during the late 1940s. The relationship between the two parties blossomed into love. On 13 August 1948, Grand Duke Vladimir and Princess Leonida were married at Lausanne. By virtue of her marriage, the bride was henceforth titled as Grand Duchess Leonida Georgievna of Russia.

After several years of marriage, the grand duke and grand duchess welcomed the arrival of their only child. Grand Duchess Maria Vladimirovna of Russia was born at Madrid on 23 December 1953. Her godparents were Queen Mother Giovanna of Bulgaria (née Savoy) and her granduncle Grand Duke Andrei Vladimirovich of Russia. 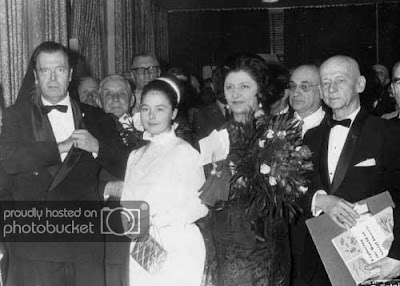 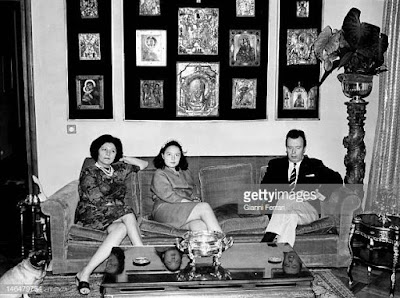 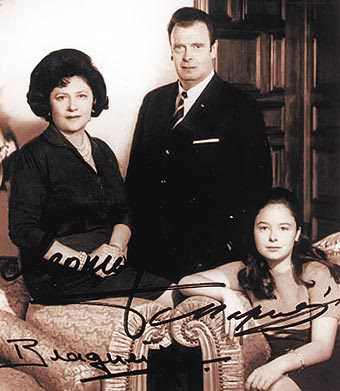 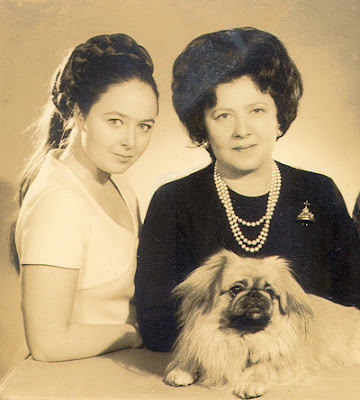 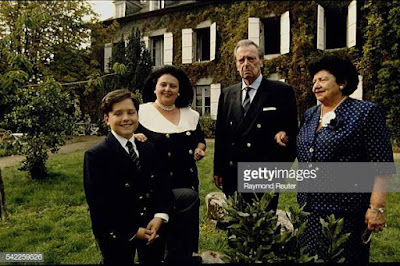 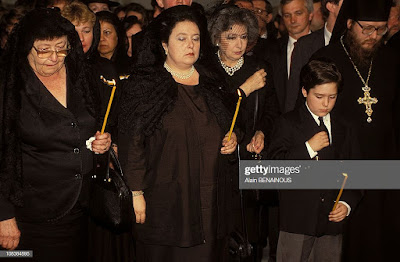 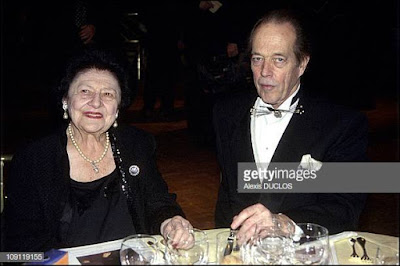 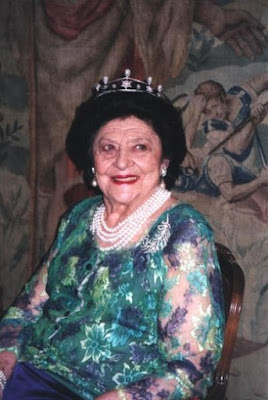 For the rest of her long life, Grand Duchess Leonida dedicated herself wholeheartedly to her roles as a wife, mother, and grandmother. An iron fist in a velvet glove, the grand duchess did everything in her power to support her husband, Grand Duke Vladimir (1917-1992), her daughter and current Head of the Imperial House, Grand Duchess Maria Vladimirovna (b.1953), and her only grandchild, Grand Duke George Mikhailovich (b.1981). Her passing was immensely mourned by her family and by all supporters of the Imperial House of Romanov who understood the pivotal part that Grand Duchess Leonida Georgievna had played in securing the dynasty's future.