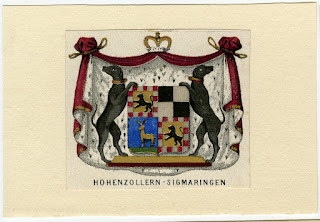 We can report that Hereditary Prince Alexander of Hohenzollern married Michelle V. Keith, a US citizen and his girlfriend, last year. Alexander is the only son of Fürst Karl Friedrich of Hohenzollern and his first wife Countess Alexandra Schenk von Stauffenberg.

In November 2021, Alexander and Michelle celebrated their religious marriage in a small Roman Catholic church in Sigmaringen. We have not yet learned when the couple’s civil wedding occurred. After his religious wedding, Alexander informed his father Fürst Karl Friedrich of his marriage. It is quite likely that the new Erbprinz will be the Fürst’s next eligible brother.

Our best wishes to the couple on their union!