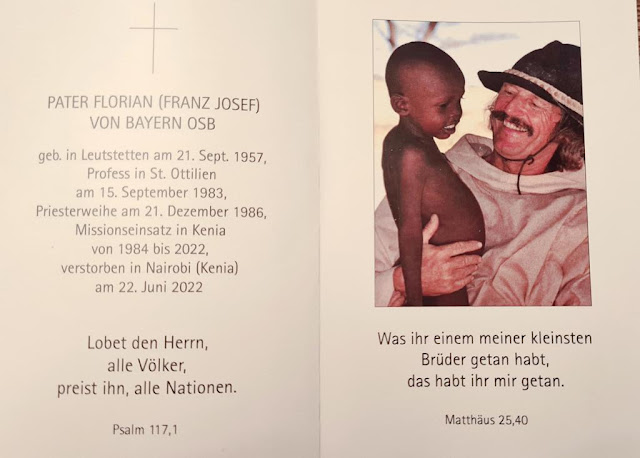 Prince Franz-Josef Michael Maria Ignatius of Bavaria, the first son and second child of Prince Rasso of Bavaria and Princess Theresa (born Archduchess of Austria), was born at Schloss Leutstetten on 21 September 1957. The prince became a Benedictine monk, a member of the Roman Catholic Order of Saint Benedict. In 1982 after finishing his studies he joined the Benedictine monastery of St. Ottilien as a novice, choosing the name Florian, and 1983 he took his first vows. Until 1996, he lived under the name Pater [Father] Florian at St. Ottilien in Emming in southern Bavaria. The following was shared about the upbringing of the prince on his website:

His childhood and youth were spent on the family farm of Rieden, the former model farm of his great-grandfather King Ludwig III of Bavaria, which used to supply the Haunersche Kinderklinik, a children’s hospital in Munich, with fresh milk.

During Franz-Josef´s childhood on the farm mainly young cattle were raised but there were also horses, goats and sheep. It was a carefree childhood. After the first years of primary school in the one-class village school of Leutstetten, he went to school in the nearby town of Starnberg.

His upbringing in agricultural surroundings formed him as a person deeply connected to animals and nature. Dealing with agricultural machinery awoke his passion for mechanics and technology.

Since 1996, Prince Franz-Josef lived between the Peramiho Abbey in Tanzania and in Kenya he became prior administrator of the Prince of Peace Benedictine Monastery - Tigoni Limuru. He worked primarily in Illeret, St Peter the Fisherman parish, and a new Benedictine Monastery in the Diocese of Marsabit, northern part of Kenya.
May Pater Florian Rest in Peace.
Sources:
Father Florian, the Benedictine monk who was a prince
Benediktinerpater Florian Prinz von Bayern in Kenia gestorben
Posted by Seth B. Leonard at 7:00 AM