The Schedule for This Weekend's Russian Imperial Wedding in Saint Petersburg

The celebrations surrounding the religious wedding of Grand Duke George of Russia and Princess Victoria Romanoff will occur over three days, beginning today and ending on Saturday. The groom is the only child of Grand Duchess Maria Vladimirovna of Russia and Prince Franz-Wilhelm of Prussia. The bride, who was born Rebecca Virginia Bettarini, is the only child of Italian Ambassador Roberto Bettarini and Carla Virginia Cacciatore. Members of the Albanian, Austrian, Belgian, Bulgarian, Egyptian, Georgian, Italian, Liechtensteiner, Montenegrin, Portuguese, Prussian, Qatari, and Serbian royal houses will be present for the first imperial wedding in Russia in over a century. According to Kirill Nemirovich-Danchenko, advisor to the Imperial Chancellery: "In total, representatives of almost 20 royal houses and sovereign dynasties will arrive in Russia these days." 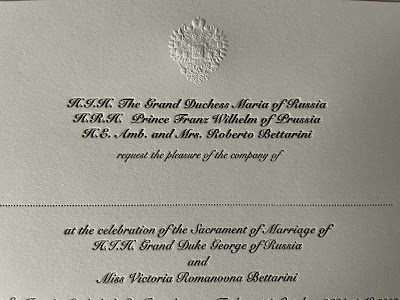 A welcome cocktail for international guests will held this evening at the Vladimir Palace in Saint Petersburg. The event will last from 7:00pm-1:00am. The palace was formerly the home of the great-great-grandfather of the groom, Grand Duke Vladimir Alexandrovich, and his family. The atmosphere of the evening will accentuaed by live musical accompaniment. About three hundred guests are invited to this gathering. Since the guests invited to this cocktail are flying in from around the world, the invitees will arrive and depart as they wish; no more than one hundred people are to be present at any given time, owing to pandemic cautions.

The Russian Orthodox wedding ceremony between Grand Duke George Mikhailovich and Princess Victoria Romanovna Romanoff will be held on Friday, 1 October, at Saint Isaac's Cathedral in Saint Petersburg. Princess Victoria will be wearing a Chaumet diadem; Grand Duke George and Princess Victoria will exchange Fabergé wedding bands. The cathedral is a state museum; however, special dispensation has been given by the government for Saint Isaac's Cathedral to be used in a religious capacity for this special event. There is a possibility that the imperial wedding will be televised live in Russia. The ceremony is to begin at noon and should last about two hours. Around 1,500 guests are expected at the wedding. The guest list has been kept under strict privacy due to security reasons; however, one can expect to see an array of European royals, Russian and foreign aristocrats, Russian clergy members, and Russian political and cultural leaders in attendance.

The gala dinner following the imperial wedding will be held at the Russian Museum of Ethnography in Saint Petersburg. Around 550 guests are invited to this event. The dinner will begin at 7:00pm and last until 11:00pm. Renowned classical musicians will offer a special touch to this celebratory evening.

On Saturday, 2 October, the celebrations surrounding the marriage of Grand Duke George and Princess Victoria will conclude at a brunch in the Constantine Palace (Great Strelna Palace). This event will commence at 1:00pm. This palace was formerly the home of the Konstantinovichi branch of the imperial family. 700 guests are expected at the brunch à la Russe. There will be a charity auction and the day will wind up with a concert dedicated to the opening of the Russian Imperial Musical Society.
For more on the Russian imperial wedding, stay tuned to Eurohistory!