The Saxe-Coburg Double Suicide that Rocked the Gotha

On 27 June 1996, Ernst-Leopold Prinz von Sachsen-Coburg und Gotha and his wife Sabine died by suicide at Bad Wiessee, a resort town in Bavaria. Ernst-Leopold was sixty-one; Sabine was fifty-five, having celebrated her birthday only two days before her untimely death. The bodies of the couple were discovered by a local farmer who came across their white Mercedes Benz outside of a pub; the car had been parked when the farmer entered the pub and was still there when he left the pub. Peering inside, the farmer discovered the horrific sight of the deceased couple, who each had hunting rifles in their laps. One of the detectives involved in the case stated: "It couldn't have been a murder then suicide. All the circumstances and all the evidence from the discovery of the bodies to the post mortem confirm the joint suicide thesis." Upon learning of the death of the couple, an unnamed relative of Ernst-Leopold told The Guardian, "Oh God, I bet the British royal family is getting anxious. It's those Coburgs again." 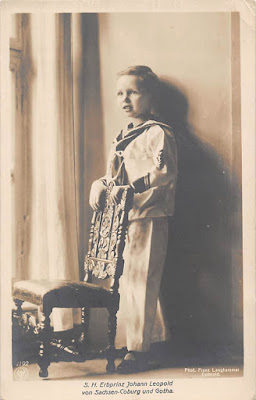 Born on 14 January 1935, Ernst-Leopold Eduard Wilhelm Josias Prinz von Sachsen-Coburg und Gotha was the eldest son and second child of Hereditary Prince Johann Leopold of Saxe-Coburg and Gotha and his wife Baroness Feodore von der Horst, who wed in 1932. Johann Leopold and Feodore's marriage was morganatic; the result of this was that Johann Leopold gave up his rights of succession to the Duchy of Saxe-Coburg and Gotha as well as the ability to pass on his princely titles to his children. Ernst-Leopold had one older sister, Marianne, and one younger brother, Peter.

In 1961, Ernst-Leopold Prinz von Sachsen-Coburg und Gotha married Ingeborg Henig. Ernst-Leopold and Ingeborg had one son, Hubertus, before divorcing in 1963. In 1963, Ernst-Leopold married Gertraude Monika Pfeiffer. Ernst-Leopold and Gertraude had five children: Viktoria, Ernst-Josias, Carl-Eduard, Friedrich, and Alice. Ernst-Leopold and Gertraude divorced in 1985. Finally, in 1986, Ernst-Leopold married Sabine-Margarethe Henning.
Ernst-Leopold found it difficult to accept his position as a morganatic member of the extended family of the Ducal House of Saxe-Coburg and Gotha. When he visited the United Kingdom, Ernst-Leopold would introduce himself as the Duke of Albany, a title that was stripped from his grandfather Duke Carl Eduard of Saxe-Coburg and Gotha in 1919. After the unification of West Germany and East Germany, Ernst-Leopold relocated to Limbach-Oberfrohna; there he established a property development and consulting company. A German baron, who was a friend of the family, recalled: "He tried to build up that business in Saxony, got taken for a ride by the sharks out there and got trapped in a hopeless financial situation. He was living beyond his means." Ernst-Leopold was hopeful that he could gain restitution of properties that had been seized by the Soviets. However, as the elderly baron remembered, "He got nothing, because the government has recognised the Soviet robbery and, anyway, he is well out of the line of succession. That's because under the law he and his children are allowed to call themselves princes and princess but they have no inheritance rights where the dukedom is concerned because his father [Johann Leopold] married wrong. She [Feodore] was an excellent woman but she wasn't a princess. Ernst Leopold made a mess of most things. His suicide was the only way out of desperation, out of a hopeless financial, economic and personal situation."
After learning of the tragic death of his first cousin, Prince Andreas of Saxe-Coburg and Gotha stated: "He had a complex about this for years. He always had problems. His last known residence was near Chemnitz. He bought up some property that wasn't very successful. So I imagine he had some problems. Some people say he got into a lot of debt. It's hard to say. He had a lot of ups and downs in his life."