Today, 18 May, Markgräfin Helene Pallavicini will be buried at Altshausen, where she passed away on 22 April at the age of ninety-one. Helene, known as "Mausi" in her family, was born a Duchess of Württemberg and was the older sister of Duke Carl of Württemberg, Head of the Royal House.

In the 1950s, Helene lived with her cousins Prince Pedro Henrique of Brazil and his wife Princess Maria at their home in Fazenda Santa Maria, in Jacarezinho, in the north of the State of Paraná. Duchess Helene of Württemberg helped her cousins with their children, and she was chosen as godmother for their son Prince Francisco of Orleans-Bragança (b.1955). 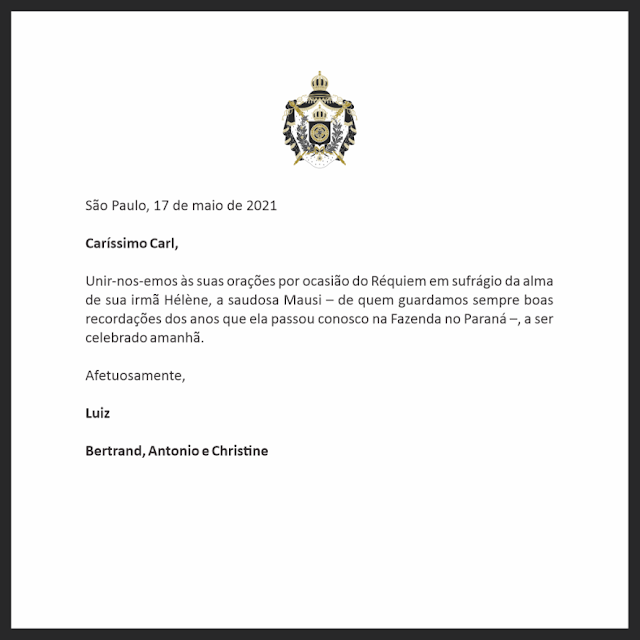 The Brazilian imperial family sent a letter to Duke Carl of Württemberg expressing their condolences on the death of his sister Markgräfin Helene Pallavicini. It reads as follows:

Dear Carl,
We will join in the prayers on the occasion of the Requiem for the soul of your sister Hélène, the late Mausi - of whom we always retain fond memories of the years she spent with us at the farm in Paraná -, to be celebrated tomorrow.
Affectionately,
Luiz
Bertrand, Antonio and Christine