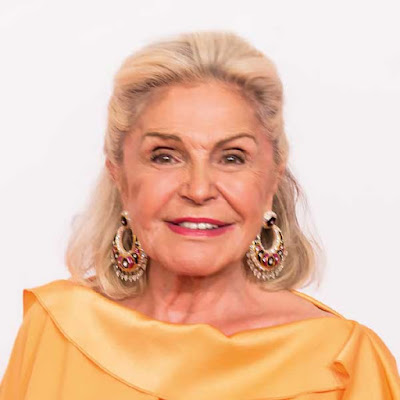 Born on 24 October 1941 at Neuilly-sur-Seine, Béatrice Marie Guillemine Huguette Pasquier de Franclieu was the second of the three daughters of Bruno Pasquier de Franclieu (1914-1944) and his wife Jacqueline Térisse (1918-1999), who married in 1938. Béatrice studied political science at the Sorbonne and then received a masters in marketing. She went on to carve out a career in fashion and worked for Dior.

In 1967, Béatrice Pasquier de Franclieu and Prince Michel d'Orléans married at Casablanca, Morocco. The pair had initially met in 1964. Michel was the son of the Count and Countess of Paris. Béatrice and Michel had four children: Princess Clotilde (b.1968; married Édouard Crépy), Princess Adélaïde (b.1971; married Pierre-Louis Dailly), Prince Charles-Philippe (b.1973; married Diana Álvares Pereira de Melo, Duchess of Cadaval), and Prince François (b.1982; married Theresa von Einsiedel). As the marriage was not approved by the Count of Paris, Prince Michel received the title Count d’Évreux; after the passing of his father, Michel's brother Henri recognised his marriage as dynastic. The marriage of Prince Michel and Princess Béatrice, Count and Countess d’Évreux, ended in divorce in 2012; the couple had separated in 1994.

Béatrice lives in Madrid. She is a doting grandmother and has twelve grandchildren.

Happy birthday to Princess Béatrice!
Posted by Seth B. Leonard at 7:00 AM No comments:

Prince Philippos and Princess Nina of Greece Marry in Athens!

Today, 23 October, Prince Philippos of Greece and Denmark and Princess Nina (née Flohr) celebrated their religious wedding at the Metropolitan Cathedral of Athens. One hundred guests were invited to be present in the Cathedral. Archbishop Ieronymos II of Athens and All Greece officiated over the ceremony, which began at 5:00pm. The crowd gathered outside of the cathedral cheered for Queen Sofía and Princess Irene, King Constantine and Prince Constantine, Queen Anne-Marie and Prince Philippos, and Princess Nina and Thomas Flohr upon their respective arrivals. In a touching scene, the king, who was in a wheel chaired pushed by his grandson, was helped to stand in order to greet the Archbishop. Prince Philippos arrived on the arm of his mother Queen Anne-Marie, who wore her pearl and diamond cross necklace. Princess Nina, wearing a Chanel wedding gown and the Greek Corsage Tiara, arrived on the arm of her father Thomas Flohr. The princess carried a bouquet of peonies.

The religious marriage of the prince and princess was followed by a reception at the National Gymnastics Association, hosted by the groom's father King Constantine II of Greece.

Our best wishes and congratulations to Prince Philippos and Princess Nina!
December 2020: Prince Philippos of Greece and Nina Flohr Wed (Civilly) in Switzerland
Posted by Seth B. Leonard at 6:00 PM No comments:

Princess Geraldine of Albania is One! 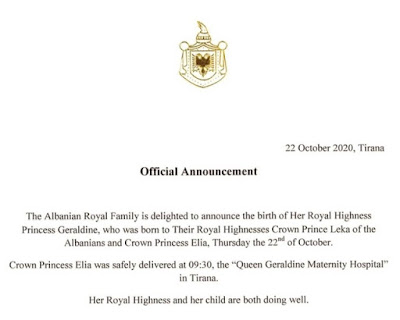 The princess is the first member of the royal family to be born in Albania since the birth of her grandfather, King Leka I of the Albanians, in 1939.

On Monday, 18 October, several members of the Greek royal family gathered together for brunch at the cafe Athénée in Athens. Crown Prince Pavlos and Crown Princess Marie-Chantal met Prince Nikolaos and Princess Tatiana for a outing ahead of the coming religious wedding of Prince Philippos and Princess Nina. Family friend Filippos Stratos, who is the godfather of one of Princess Alexia's daughters, joined the group for brunch. Philippos and Nina will celebrate their religious marriage this Saturday, 23 October.
For the full photo gallery, please visit this link: TT NYHETSBYRÅN
Posted by Seth B. Leonard at 8:00 AM No comments: 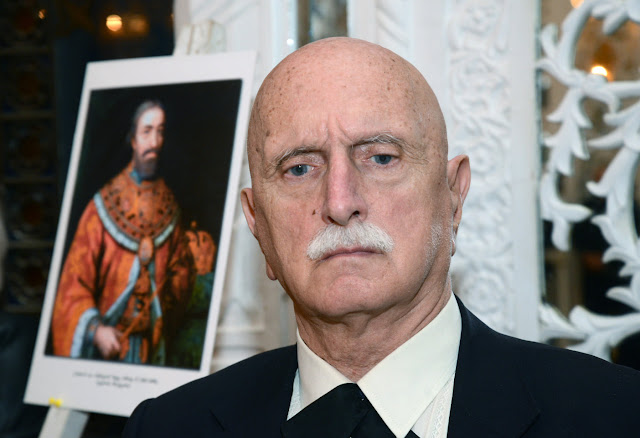 Prince Giorgi Bagrationi-Japaridze died earlier this week. He was a great-great-great-great-great grandson of King Alexander V of Imereti. A 2007 article about the possibility of a monarchical restoration interviewed Giorgi and his mother:

Historian Raul Chagunava, a longtime researcher of the Bagrationi family, believes that the crown by right belongs to Nugzar Bagrationi-Gruzinski, the director of Tbilisi’s Tumanshivili Theater and a patrilineal descendant of Giorgi XII. Nino Bagrationi, the 90-year-old direct descendant of Solomon II told EurasiaNet that she recognizes the claim of Nugzar Bagrationi-Gruzinski. Meanwhile, Georgia’s monarchist party, Royal Crown, favors another ancillary branch.

But feelings among those Bagrationis still in Georgia are decidedly mixed about the patriarch’s proposal.

Setting up a constitutional monarchy would not solve Georgia’s political woes, noted Giorgi Bagrationi-Jafaridze, a laboratory head, and the son of Nino Bagrationi. The sovereign, he argued, could become a mere puppet in the hands of politicians. "While absolute monarchy is out of the question, the king has to hold control over strategic matters," he commented.

When asked about the restoration of Georgia’s monarchy. Nino Bagrationi, a professor of engineering whose features are reminiscent of those of her royal ancestors, smiles calmly and shakes her head

"The time is not ripe for this," Bagrationi said. "The country has to grow and develop. Later… perhaps."

Source: Eurasianet - Time for a King for Georgia?

Born in 1948, Prince Giorgi was the son of Princess Nino Bagrationi (1915-2006), head of the Imereti branch of the Bagrationi family, and her husband Prince Avtandil Djaparidze (d.1959). Giorgi's maternal grandparents were Prince David Bagrationi of Imereti (1894-1937) and Princess Kethevan Machabeli (1892-1981).

May Prince Giorgi Rest in Peace. 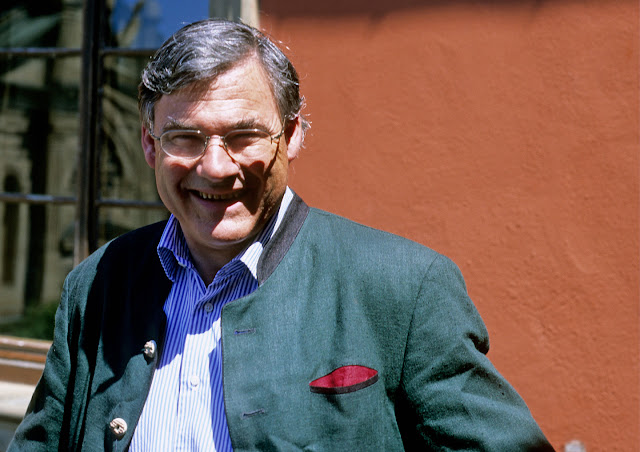 Our best wishes to Count Karl Eugen on his birthday! 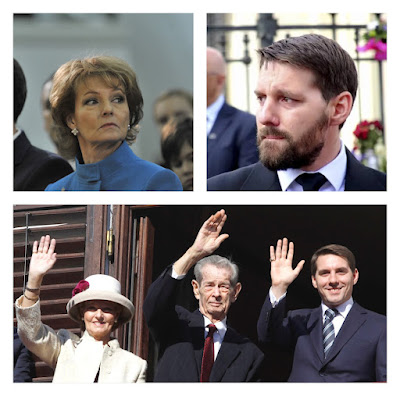 On Wednesday, 6 October, Judge Lionel Guignard of the District Court of La Côte, which hears cases from Morges and Nyon, acquitted Nicholas de Roumanie Medforth-Mills (also known as "Principele Nicolae al Romaniei" and "Prince Nicholas of Romania") of charges levelled at the erstwhile Romanian heir in 2017 by his aunt Crown Princess Margarita of Romania (now titled "Her Majesty Margareta, Custodian of the Crown" and "Margareta, Majestatea Sa Custodele Coroanei Române"). Margarita became a Swiss citizen in June 2017; she has dual Romanian-Swiss citizenship. On 7 November 2017, Margarita called Vaud police when her nephew attempted to visit his grandfather, the ailing King Michael of Romania, at the home where the king was living in Aubonne, Switzerland. Acting on behalf of her incapacitated father, the crown princess pressed charges against her nephew and alleged that Nicholas committed home invasion and assault when he tried to see the king for a final time. The court dismissed these claims. In November 2017, following his aunt's rejecting his final plea to see his dying grandfather, Nicholas confessed: "My only desire was to see my grandfather one last time, and to say goodbye to him in the most respectful, calm and Christian way possible."

At the ruling, Nicholas de Roumanie Medforth-Mills was present in chambers with his lawyers, Malek Adjadj and Kristina Croce. Nicholas became emotional and hugged his defenders when the judge ruled in his favour. Margarita of Romania was absent "due to illness" at the proceedings and represented by her attorney, Marc-Antoine Aubert. That Margarita, the Head of the Romanian Royal Family, could not attend the court hearing because of illness is curious, because she had held several events at Elisabeta Palace in the days and weeks prior to the ruling.

The Swiss court was apprised of the fact that before Nicholas's attempt to visit his grandfather on 7 November 2017, which was Nicholas's seventh and final try, the prince had previously tried to see the king on six different occasions over the previous two years, beginning in 2015. On each of these occasions, Nicholas was denied access to his grandfather. Aware that his grandfather Michael, who had acted as a substitute father since Nicholas's youth, was on his deathbed, Nicholas tried to enter the Swiss residence of the royal family when two nurses arrived. It was at this point that Margarita, Nicolas's aunt and the acting Head of the Romanian Royal Family since King Michael's retirement from public life in March 2016, summoned police to the property. The crown princess alleged that her nephew assaulted the nurses (a claim which has been found to be false) and that he committed home invasion (a claim which has also been dismissed).

Judge Lionel Guignard received testimony from several relatives of the late king, who are not named in Swiss news reports, that King Michael had asked his caretakers/family on numerous occasions during this time-frame to see his grandson. Each time, the king's requests to see his grandson, whom Michael named the eventual heir of the Romanian royal family in 2010, were reportedly rebuffed with objections by Michael's eldest daughter Margarita. The court learned that King Michael had been suffering from cognitive impairment and Alzheimer's disease. The issue of the king's impairment and the possibility of its influence on the August 2015 decision to remove his grandson from the succession was discussed in court; however, the judge did not make a ruling regarding this issue. 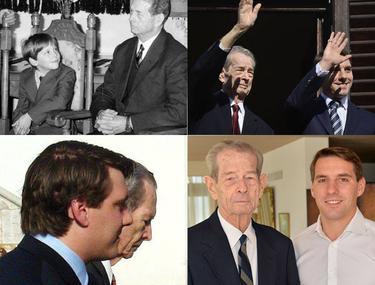 In his ruling, Judge Guignard concluded that "there is nothing in the dossier to confirm that the king did not want to see his grandson." Afterwards, Nicholas of Romania stated: "My right to see my grandfather on his deathbed has been legitimized." Reportedly, the attorney for Her Majesty Margareta, Custodian of the Romanian Crown, rejected the idea of any familial reconciliation as far as his client was concerned. 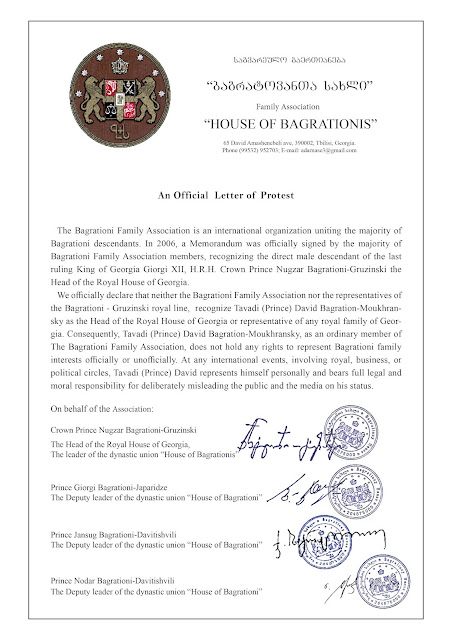 Last week, several members of different branches of the Georgian royal family issued a letter of protest against their cousin Prince David Bagration-Mukhransky. The letter reads as follows:

An Official Letter of Protest

On behalf of the Association:

The Head of the Royal House of Georgia,

The leader of the dynastic union "House of Bagrationis"

The 55th Birthday of Landgrave Donatus of Hesse 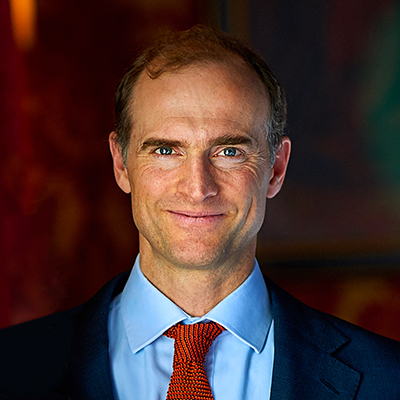 Today, the Landgrave of Hesse marks his fifty-fifth birthday!
Born on 17 October 1966 at Kiel, Prince Heinrich Donatus Philipp Umberto of Hesse was the second child and first son of Landgrave Moritz of Hesse and his wife Princess Tatiana zu Sayn-Wittgenstein-Berleburg. The paternal grandparents of Donatus were Landgrave Philipp of Hesse and Princess Mafalda of Savoy. The maternal grandparents of Donatus were Fürst Gustav Albrecht zu Sayn-Wittgenstein-Berleburg and Marguerite Fouché d'Otrante.
In 2003, Hereditary Prince Donatus of Hesse married Countess Floria von Faber-Castell (b.1974), the daughter of Count Hubertus von Faber-Castell and Baroness Adelheid von der Leyen zu Bloemersheim. Donatus and Floria have three children: twins Princess Paulina and Hereditary Prince Moritz (b.2007) as well as Prince August (b.2012).
In April 2021, Donatus attended the funeral of Prince Philip, Duke of Edinburgh. The Landgrave of Hesse was present in his role as representative of the House of Hesse, into which Philip's two sisters, Cecile and Sophie, had married.
Our best wishes to the Landgrave of Hesse on his birthday!
Posted by Seth B. Leonard at 7:00 AM No comments: