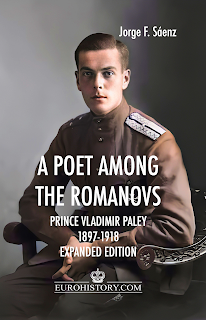 Jorge F. Sáenz brings to life the previously unknown figure of Prince Vladimir Paley. In doing so, Mr. Sáenz adds to a long and distinguished list of historical studies he has written over the last thirty years. His books number well over a dozen, most of them focusing on various aspects of Costa Rica’s history and unique democratic traditions, that make the country a bastion of democracy in Latin America. His study of the life of Prince Vladimir Paley was first published as a biographical essay in Eurohistory — The European Royal History Journal. The success of this essay led to the story of Vladimir Paley becoming a full-on book. Mr. Sáenz is a career diplomat for Costa Rica, as well as a distinguished law professor at the University of Costa Rica. 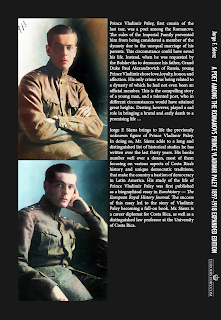 This unique book, also containing many samples of the young poet's work, has a 24-page photo section depicting Vladimir Paley and those closest to him. We are exceedingly happy to be able to bring this excellent historical work to you in hardbound form.

A Poet Among the Romanovs will undoubtedly enrich your Romanov Collections!

The book is printing and will be available at the end of January 2021, the first Eurohistory book of the New Year!

Posted by Arturo Beéche at 2:00 PM