RECOLLECTIONS – The Memoirs of Victoria Milford Haven off to the printer! 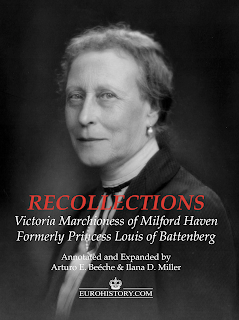 It is with much anticipation and a great sense of accomplishment that we at EUROHISTORY announce the release to the printer of our latest book, in fact our 33rd book!

RECOLLECTIONS – The Memoirs of Victoria Milford Haven, Formerly Princess Louis of Battenberg promises to be yet another must-have in the long line of books published by our small publishing house. 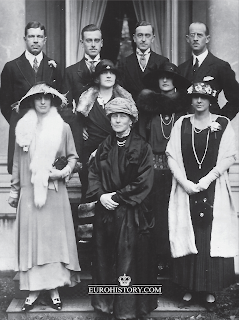 Born Princess Victoria of Hesse and by Rhine in 1863, she became one of her English grandmother's most frequent correspondents, as well as a surrogate mother to her younger siblings after the untimely death in 1878 of their mother, Grand Duchess Alice of Hesse. Married in 1884 to her father's first cousin, Prince Louis of Battenberg, Victoria soon became a witness to some of the most momentous historical episodes of her lifetime. Her thoughts (open, frank, no-nonsense, clear) are to be found inside the 280-page book containing her memoirs, her "recollections." The book has been handsomely illustrated with nearly 400 exquisite images sourced from various archives, family collections, as well as the incomparably vast EUROHISTORY Royal Photographic Archive. 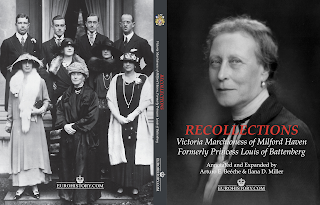 We expect RECOLLECTIONS – The Memoirs of Victoria Milford Haven, Formerly Princess Louis of Battenberg out in early December 2020....stay tuned for further purchasing information. As usual, the book will be available at our website:

Our other resellers (Hoogstraten English Bookstore, Librairie Galignani, Amazon. com and Amazon.co.uk) will also have copies for you to conveniently purchase!

Posted by Arturo Beéche at 1:56 PM