OTD: Sixty Years Since the Death of Prince François d'Orleans During Military Service in Algeria


On Tuesday, 11 October 1960, Prince François d'Orléans was killed in action at the Kabilye Mountains by members of the Algerian National Front. The prince, twenty-five and a second lieutenant in the Chasseurs Alpins, had returned from a leave in France just three weeks earlier. Upon learning of his death, the Count and Countess of Paris immediately flew to Algiers to claim the body of their son. Prince Henri, Count of Paris, received a telegram from Charles de Gaulle, President of France, which read: "The sacrifice of the young Prince François, who died gloriously for France, is another example of the services that his family has rendered to this country and which are the fabric of our history. May God have him in his keeping now. My wife and I ask you and the Countess of Paris to accept our respectful and sorrowful sympathy." 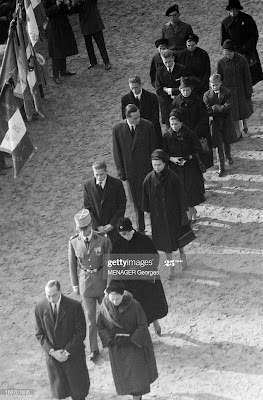 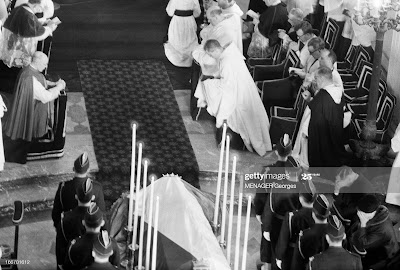 The funeral of Prince François d'Orléans took place at Dreux on 17 October 1960. This event was attended by all of the family of François: his parents, his siblings, and his siblings-in-law. The prince was posthumously granted the title Duc d'Orléans and received the Légion d'honneur.
Posted by Seth B. Leonard at 7:00 AM