The Engagement of Prince Konrad of Liechtenstein and Catalina de Biolley 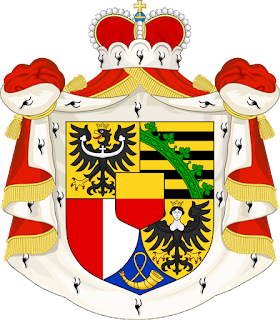 Prince Konrad Emanuel Josef Michael Franziskus Stephan Maria of Liechtenstein was born at Frankfurt on 15 February 1992. Konrad is the son of Prince Stefan of Liechtenstein (b.1961), Liechtenstein's Ambassador Extraordinary and Plenipotentiary to the Holy See and former Ambassador to Germany and Switzerland, and Countess Florentine von Thun und Hohenstein (b.1963), who married in 1988. Konrad's paternal grandparents are Prince Alfred of Liechtenstein (1929-2012) and Princess Josephine zu Löwenstein-Wertheim-Rosenberg (b.1937). Konrad's maternal grandparents are Count Romedio von Thun und Hohenstein (1934-1965) and Countess Sophie von Cassis-Faraone (b.1936). Prince Konrad of Liechtenstein has three siblings: Prince Lukas (b.1990), Princess Anna Maria (b.1994), and Princess Rita (b.1999).

Congratulations to Konrad and Catalina!
Posted by Seth B. Leonard at 7:00 AM