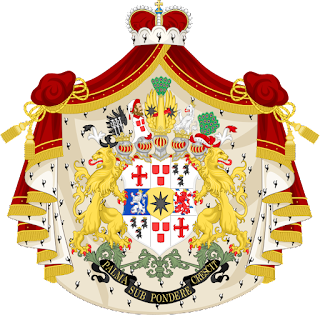 Prince Volkwin served in the Germany military. He was firstly married in a civil ceremony at Bad Pyrmont on 1 December 1967 to Baroness Orlinda Frn von Gablenz (b.1938); the couple's religious union was held at Bad Driburg on 2 March 1968. Volkwin and Orlinda had two sons, Prince Anton-Ulrich (b.1969; married Baroness Elisabeth von Hammerstein-Equord) and Prince Nikolaus (b.1970; married Princess Katharina zu Hohenlohe-Langenburg), before divorcing in 1980.

Prince Volkwin zu Waldeck und Pyrmont is a first cousin of Fürst Wittekind, the Head of House Waldeck.
Posted by Seth B. Leonard at 10:34 AM