The 80th Birthday of Archduchess Anna-Gabriele of Austria, Daughter-In-Law of Emperor Karl and Empress Zita 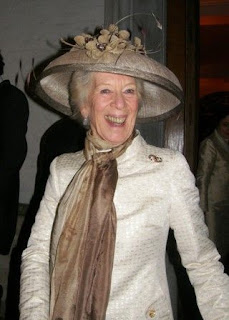 On 15 October 1971, Fürstin Anna-Gabriele von Wrede married Archduke Rudolph of Austria (1919-2010) at Ellingen, Germany. The sixth child and fifth son of Emperor Karl and Empress Zita of Austria, Rudolph was the widower of Countess Xenia Tschernyschev-Besobrasow (1929-1968), with whom he had four children: Archduchess Maria-Anna (b.1954; married Prince Peter Galitzine), Archduke Carl Peter (b.1955; married Fürstin Alexandra von Wrede, the niece of Anna-Gabriele), Archduke Simeon (b.1958; married Princess Maria of Bourbon-Two Sicilies), and Archduke Johannes (1962-1975). When Archduke Rudolph and Anna-Gabriele married, her first cousin Princess Anna-Eugénie of Arenburg became her sister-in-law, as Anna-Eugénie had married Rudolph's brother Felix in 1952.