The Passing of a Brazilian Royal: Prince Eudes of Orléans and Bragança (1939-2020) 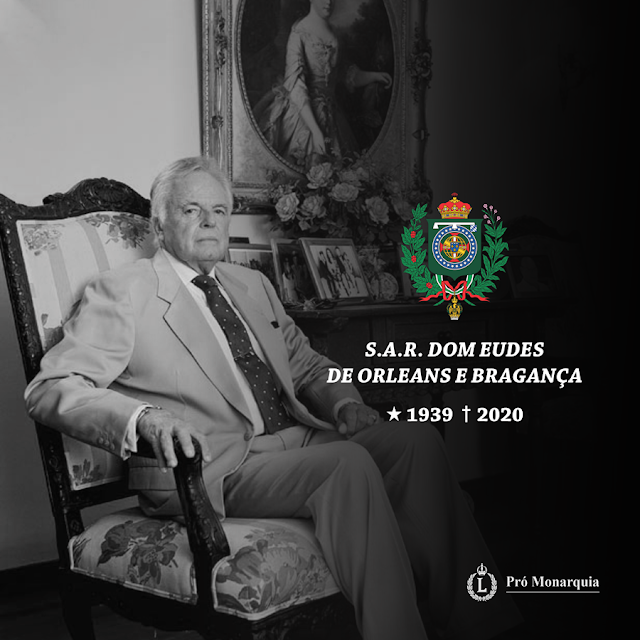 Prince Eudes of Orléans and Bragança passed away today, 13 August 2020, in Rio de Janeiro. He was eighty-one years-old. The prince had suffered from ill health for some time; the case of death was renal failure.

The Secretariat of the Head of the Imperial House of Brazil has communicated the following message announcing the death of Prince Eudes of Orléans and Bragança:

We all ask for prayers for the eternal rest of his soul.

Prince Eudes Maria Ranieri Pedro José Miguel Gabriel Raphael Gonzaga of Orléans and Bragança was born on 8 June 1939 at Mandelieu. Eudes was the second son of Prince Pedro Henrique of Brazil (1909-1981) and Princess Maria Elisabeth of Bavaria (1914-2011), who married in 1937. Born during the exile of the Imperial Family, Prince Eudes was registered at the Consulate General of Brazil in Paris as a Brazilian citizen, fulfilling the mandate of the Empire Constitution, thus guaranteeing his rights to the Throne and the Crown of Brazil. His baptism was celebrated in the Chapel of Mas-Saint-Louis, the home of his paternal grandmother, the Dowager Princess Imperial Maria Pia of Brazil (born Princess of the Two Sicilies; 1878-1973). The godfather of Prince Eudes was his great-uncle, Prince Ranieri (1883-1973), Duke of Castro and Head of the Royal House of the Two Sicilies.

Fluent in Portuguese, French, German and English, Prince Eudes began his studies at the Colégio Santo Inácio, when his family was still living at Rio de Janeiro. After moving to the South, Eudes studied at the Cristo Rei College, run by German priests, and completed his secondary education in 1957. Following his father's advice, Prince Eudes entered the Naval School and the Submarine School, becoming one of the greatest Brazilian specialists in this type of vehicle. Eudes did postgraduate studies in Economics at the Fundação Getúlio Vargas, and took specialisation courses at Cambridge University, in the United Kingdom.

During their honeymoon to Jamaica in April 1976, Eudes and Mercedes survived a harrowing airplane accident. The plane on which the couple were passengers crashed, and they remained missing for four days, much to the despair of family members. Fortunately, Prince Eudes, his wife Mercedes, and the pilot Ronald Fletcher all survived. The news of the couple's rescue was met with great joy.