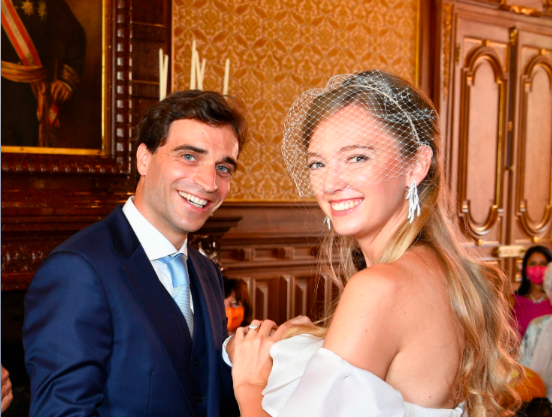 Her Imperial and Royal Highness Archduchess Eleonore of Austria married Jérôme d'Ambrosio today, 20 July. The couple were united in a civil ceremony in Monte Carlo, Monaco. The celebration happened in an intimate circle of family and friends. The wedding between Eleonore of Austria and Jérôme d'Ambrosio had been planned rather differently. Covid-19 and related legal restrictions have made it impossible to have a formal wedding as had been planned for this year. The church wedding in a bigger circle will be celebrated as soon as the pandemic restrictions are lifted. Archduchess Gloria acted as the witness for her sister Eleonore, and Olivia d'Ambrosio acted as the witness for her brother Jérôme. After the wedding, the couple was joined by a few more friends for a celebratory lunch.

Archduchess Eleonore of Austria was born on 28 February 1994 at Salzburg as first child and daughter of Archduke Karl, current Head of the Austrian Imperial House, and his wife Archduchess Francesca (née Thyssen-Bornemisza). Eleonore works as a jewellery designer. Jérôme d'Ambrosio was born on 27 December 1985 in Etterbeck, Belgium, as the son of Henri D'Ambrosio and Gisele. Jérôme is a Belgian Formula E racing driver for the Indian team Mahindra Racing.

The couple's engagement was announced in March 2019.


Congratulations to Eleonore and Jérôme as they celebrate their civil wedding!
Posted by Seth B. Leonard at 9:55 AM