An Engagement in the British Branch of the Prussian Royal Family 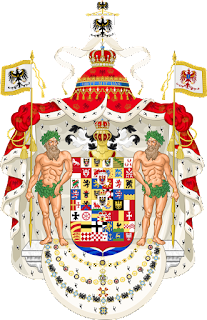 In The Telegraph of Monday, 27 July 2020, the engagement was announced between Frederick "Fritzi" von Preussen and Mathilda "Tilly" Johnson. The couple have been dating for several years. Fritzi von Preussen is a second cousin of Prince Georg Friedrich of Prussia, Head of the Royal House.

Mathilda Noel Johnson was born in 1989. She is the daughter of Mr Rupert Johnson and his wife Simonetta (née Barber).

A special thank you to Michael Rhodes of the Peerage News Blog for providing the details of the engagement!
Posted by Seth B. Leonard at 8:52 PM