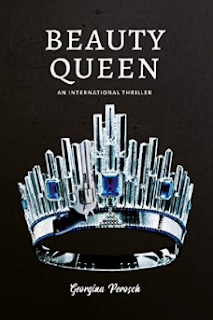 On 25 June, Georgina Perosch published her first novel in English - Beauty Queen: An International Thriller. The book had earlier appeared in Italian and Spanish editions. The following is a summary of the book's storyline:


When Miss Universe, Cecilia Mendoza is enrolled by the CIA to kill the President of her country, Venezuela, she is convinced that she must cooperate. But things are hardly how they seem and Cecilia will end up embroiled in a spiderweb of conspiracies where nothing can be taken as it seems. Will she be able to carry out her mission? And above all, can she resist the fascinating President? A spy story that will take you from Moscow, to New York, Monte Carlo, and to the white sanded beaches of the Caribbean islands. You will discover Venezuela, a beautiful although difficult country. A plot that will keep you wondering until the last page and that will carry you away to places where dreams live. Until you too discover that nothing is as it seems.

The Author Page on Amazon tells us more about the writer of Beauty Queen, Georgina Perosch:

Rebecca Virginia Bettarini who writes under the pen name Georgina Perosch is an Italian writer of thrillers and novels. She received an international upbringing and lived in several countries including Iraq, Venezuela, Paris, Toronto, Brussels, Moscow and Luxembourg. She is fluent in several languages - Italian, Spanish, French and English - and she simultaneously writes her books in more than one language.

She creates intricate plots full of twists and turns so that the reader will never know exactly what happens next. Her book endings are always highly surprising!

Rebecca Bettarini is, of course, the longtime partner of Grand Duke George Mikhailovich of Russia. A portion of the proceeds from the sales of Beauty Queen will go directly to the Russian Imperial Foundation, which "aims to work in partnership with the very best non-profit organisations in Russia and abroad, those providing the most effective and efficient assistance to the most needy and disadvantaged in all corners of the country." During the COVID-19 pandemic, the foundation has supported a children's hospice as well as food-banks in Russia in addition to a hospital in Italy.