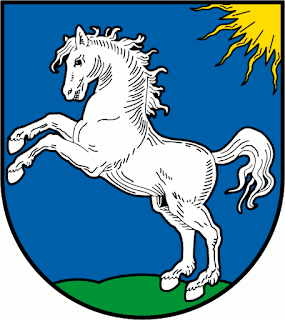 Recently, HSH Fürstin Hildegard zu Stolberg-Roßla passed away at the age of ninety-seven in the MathildenHospital at Büdingen. The princess had been admitted to hospital due to a broken bone. Due to her fragile state of health, the Fürstin zu Stolberg-Roßla was not able to recover. Mayor Ulrike Pfeiffer-Pantring of Ortenberg once said of the late princess: "Fürstin Hildegard, you are the perfect mix of nobility and democracy for us."

On 5 October 1922, Hildegard Anna Sauerbier was born at Hanau as the daughter of Oskar Sauerbier and Sofie Klaus. Hildegard's father Oskar was a dentist. Perhaps due to this early exposure to medicine, Hildegard went on to become an obstetrician herself. Her practice was centred in Ortenberg. The "Frau Doktor" was popular amongst the inhabitants of her city: she would often made house calls, her professional knowledge was highly valued, and she was viewed as a trailblazer for women seeking to enter the medical field. In addition to her medical career, Fürstin Hildegard was a talented gymnast and diver in her youth.

Dr. Hildegard Sauerbier married Fürst Johann Martin zu Stolberg-Roßla (b.Roßla 6 October 1917) on 27 January 1967 in a civil ceremony at Ortenberg; the following day, on 28 January, the couple wed in a religious ceremony at the Kloster Engeltal near Altenstadt, Hesse. The bride was forty-four and the groom was forty-nine. Johann Martin was a son of Fürst Christoph Martin zu Stolberg-Roßla (1888-1949) and Princess Ida Reuß (1891-1977). Through his father, Johann Martin was a nephew of Princess Elisabeth zu Stolberg-Roßla (1885-1969), who married Duke Adolf Friedrich of Mecklenburg-Schwerin as his second wife. More notably, through his mother Ida, Johann Martin was a nephew of Princess Hermine Reuß (1887-1947), who married as her second husband German Emperor Wilhelm II. In 1945, Empress Hermine briefly resided with her sister Ida, brother-in-law Christoph Martin, and nieces and nephews at Schloß Roßla.

Hildegard and Johann Martin did not have children. Hildegard's husband, the 4th Fürst zu Stolberg-Roßla, was killed in an automobile accident on 10 December 1982 at Frankfurt.

Owing to the current pandemic, the funeral of the Dowager Fürstin zu Stolberg-Roßla will take place in the strictest family intimacy. In time, it is hoped that a larger celebration of Hildegard's life will be possible.