Princess Felicitas married Prince Bernhard of Saxe-Weimar-Eisenach (1917-1986) on 12 March 1943 at Heinrichau. Bernhard was the third child and second son of Grand Duke Wilhelm Ernst of Saxe-Weimar-Eisenach (1876-1923) and his second wife Princess Feodore of Saxe-Meiningen (1890-1972). Felicitas and Bernhard had three children: Princess Katharina (b.1944), Prince Alexander (1945-1945), and Prince Wilhelm Ernst (b.1946). Felicitas and Bernhard divorced in 1956 after thirteen years of marriage.


In May 1973, Prince Wilhelm Ernst of Saxe-Weimar-Eisenach, the only surviving son of Felicitas, married Eva Katalin [Katharina] Kovarcz de Kovarczfalva (b.1945). Eva was the daughter of Dezsö Kovarcz de Kovarczfalva and Eva-Maria Fiala-Vogelsang. Wilhelm Ernst and Eva had two children, Princess Désirée (b.1974) and Prince Georg-Constantin (1977-2018), before divorcing in 1985. Eva married Fürst Karl von Wrede (b.1942) in 1991.


From her four grandchildren, Princess Felicitas zu Salm-Horstmar has seven great-grandchildren. In 1991, her granddaughter Princess Eugenia of Hohenzollern married Alexander Sautter: the couple have two daughters. In 2000, her granddaughter Princess Désirée of Saxe-Weimar-Eisenach married Count Florian von und zu Hoensbroech (b.1969): the couple have five sons.


In August 2015, the ninety-five year-old Princess Felicitas zu Salm-Horstmar attended the marriage of her grandson Prince Georg-Constantin of Saxe-Weimar-Eisenach to Olivia Page (b.1979). Given that the Saxe-Weimar-Eisenach dynasty was short of male dynasts, Georg-Constantin would have eventually become the Head of the Grand Ducal House after his cousin Michael Benedikt and his father Wilhelm Ernst. Sadly, the prince died as the result of an equestrian accident in 2018. 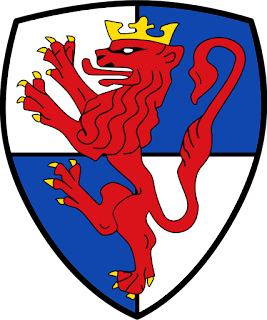 Princess Felicitas is a first cousin once removed of Fürst Philipp Otto zu Salm-Horstmar, the head of the family.

We wish the Princess many happy returns of the day!
Posted by Seth B. Leonard at 12:14 AM