HRH Princess Marie-Thérèse Cécile Zita Charlotte of Bourbon-Parma was born in Paris on 28 July 1933 as the third child and second daughter of Prince Xavier of Bourbon-Parma (1889-1977) and Madeleine de Bourbon-Busset (1898-1984). Xavier and Madeleine married in 1927 and had six children: Princess Françoise (b.1928; married Prince Eduard von Lobkowicz), Prince Carlos Hugo (1930-2010; married Princess Irene of The Netherlands), Princess Marie-Thérèse, Princess Cécile (b.1935), Princess Marie-des-Neiges (b.1937), and Prince Sixte-Henri (b.1940). Empress Zita of Austria was one of the aunts of Marie-Thérèse; Prince Felix of Luxembourg, husband of Grand Duchess Charlotte, was her uncle; Queen Anne of Romania was among her first cousins.

Displaying early her independent spirit, Marie-Thérèse quickly became a polyglot, speaking fluent French, English, German, and Spanish. The princess studied philosophy at Oxford University. She then went on to study political science at the Sorbonne in Paris. Marie-Thérèse became a specialist in the legal and political systems in Islamic nations.


Between 1958-1959, it was frequently rumoured that Princess Marie-Thérèse was on the verge of becoming engaged to King Baudouin of the Belgians. Together with his sister Marie-des-Neiges, the princess had attended a ball at hosted by the Belgian monarch in April 1958. Marie-Thérèse was described at the time as "a Spanish-type beauty. She has lovely wide dark eyes and a magnificent figure. She is intellectual but not a bluestocking." Alas, a royal romance had not flourished: Baudouin went on to marry Spanish aristocrat doña Fabiola Mora y Aragón, and Marie-Thérèse was never to marry.


In 1964, the princess attended the wedding of her brother Carlos Hugo to the Dutch princess Irene, daughter of Queen Juliana. Irene's conversion to Roman Catholicism and decision to marry a prince as politically active as Carlos Hugo was understandably met with apprehension in the Netherlands. Displaying a strong loyalty to her brother, Marie-Thérèse supported both Carlos Hugo and Irene as they embarked on married life.


Two decades after the death of Infante Alfonso Carlos, Duke of San Jaime, Marie-Thérèse's father Xavier assumed the mantle of Carlist claimant to the throne of Spain in the 1950s. Xavier continued to advocate the conservative policies disseminated by the Carlist party. However, as Xavier's health failed, his son Carlos Hugo attempted to turn the tide of the Carlist party towards more liberal and socialist ideals. In this quest, he was supported by his three youngest sisters: Marie-Thérèse, Cécile, and Marie-des-Neiges. Owing to their political views, the royal trio became known by the moniker "the red princesses." In an interview given to El Cuaderno in June 2019, Marie-Thérèse recalled the political evolution that her brother, her sisters, and she set out to effectuate: "We wanted to link the past with modernity, and it seemed to Carlos [Hugo] and all those who accompanied us that what would best translate this historical aspiration today, what our ancestors had wanted, was the concept of self-management. We proposed self-management in three areas: the political, the territorial, and the economic." Marie-Thérèse was not present at the Montejurra massacre in May 1976, when far-right and disaffected members of the Carlist movement opened fire upon a large Carlist gathering. Her brother Carlos Hugo, her sister-in-law Irene, and her sister Marie-des-Neiges were at Montejurra. Marie-Thérèse recalled that her older brother Carlos Hugo had specifically asked her to stay away from this event. The political views of Marie-Thérèse and her brother and two sisters alienated them from her parents and her sister Françoise and brother Sixte-Henri. In May 1981, the princess became a Spanish citizen, and she resided in the country for many years. Eventually, she relocated to France.


Unconventional and unique, Marie-Thérèse was a popular relative amongst her Gotha relations. The princess remained close to her nephews and nieces, the children of Carlos Hugo and Irene. In 2010 and 2013, respectively, she attended the weddings of her nephews, Princes Carlos and Jaime of Bourbon-Parma. In 2016, Marie-Thérèse participated in the festivities in Tirana surrounding the wedding of Crown Prince Leka of Albania and Elia Zaharia.


Princess Marie-Thérèse of Bourbon-Parma passed away at Paris on 26 March 2020 after suffering complications arising from being diagnosed with coronavirus (COVID-19). The princess was a professor of sociology at the Universidad Complutense de Madrid. Marie-Thérèse is survived by her sisters Françoise, Cécile, and Marie-des-Neiges, as well as by her brother Sixte-Henri. The princess is also survived by her nephews and nieces as well as her great-nieces and great-nephews. Marie-Thérèse was a devout Roman Catholic. 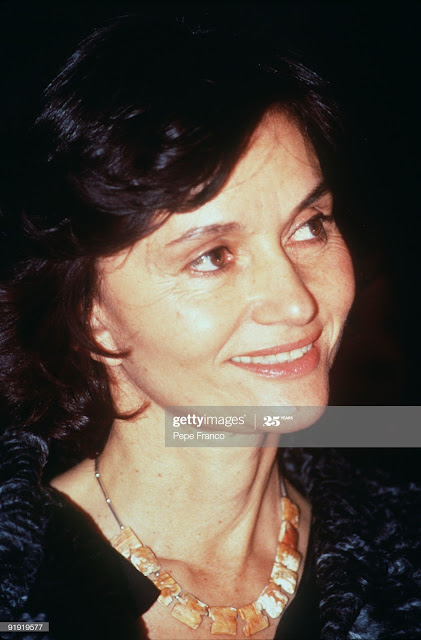 Requiesce in pace.
Posted by Seth B. Leonard at 8:33 PM