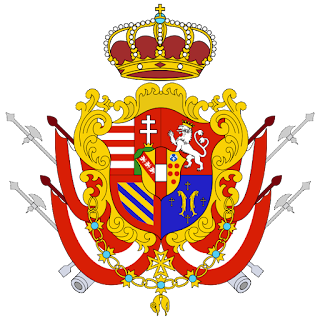 On Friday, 27 March, Archduke Sigismund of Austria, Titular Grand Duke of Tuscany, issued a statement offering good wishes and strength to the Tuscan people during the ongoing public health crisis due to coronavirus. Sigismund (b.1966) is the Head of the Grand Ducal House of Tuscany. He is son of Archduke Leopold Franz (b.1942), who renounced his rights as Head of House to his eldest son in 1993, and Laetitia de Belzunce-d'Arenberg (b.1941). 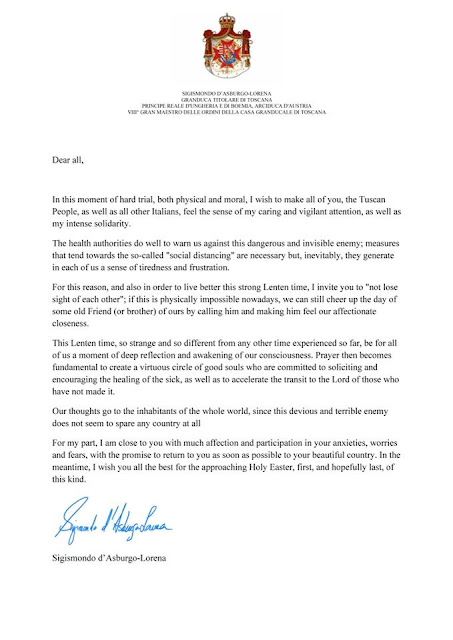 In this moment of hard trial, both physical and moral, I wish to make all of you, the Tuscan People, as well as all other Italians, feel the sense of my caring and vigilant attention, as well as my intension solidarity.

The health authorities do well to warn us against this dangerous and invisible enemy; measures that tend towards the so-called "social distancing" are necessary, but, inevitably, they generate in each of us a sense of tiredness and frustration.

For this reason, and also in order to live better this strong Lenten time, I invite you to "not lose sight of each other"; if this is physically impossible nowadays, we can still cheer up the day of some old Friend (or brother) of ours by calling him and making him feel our affectionate closeness.

[May] this Lenten time, so strange and so different from any other time experienced so far, be for all of us a moment of deep reflection and awakening of our consciousness. Prayer then becomes fundamental to create a virtuous circle of good souls who are committed to soliciting and encouraging the healing of the sick, as well as to accelerate the transit to the Lord of those who have not made it.

Our thoughts go to the inhabitants of the whole world, since this devious and terrible enemy does not seem to spare any country at all.

For my part, I am close to you with much affection and participation in your anxieties, worries and fears, with the promise to return to you as soon as possible in your beautiful country. In the meantime, I wish you all the best for the approaching Holy Easter, first, and hopefully last, of this kind.


Archduke Sigismund is the great-great grandson of Grand Duke Ferdinand IV of Tuscany, who was the last member of the dynasty to rule. Ferdinand IV (1835-1908) reigned for less than a year, between June 1859 and March 1860, when the grand duke lost his country due to Italian unification under the Savoys of Sardinia.