Three years ago, on 8 October 2016, Crown Prince Leka of the Albanians and his fiancée Elia Zaharia were married in a splendid ceremony at the Royal Palace in Tirana.


Their wedding was covered by media from around the world, including the European Royal History Journal. A video showing the plethora of royal, imperial, and noble guests to the wedding can be seen here (...the film was taken by the mother of the author of this post, whose birthday happened to be the same day as the royal nuptials). The union of Leka and Elia was a wonderfully organised event that showed how much affection the couple has from their contemporaries at home and abroad. 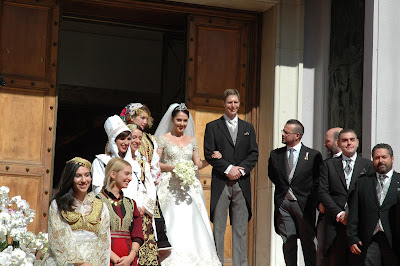 We wish Their Royal Highnesses a very happy anniversary!

More pictures from the wedding may be viewed here: Scenes from the Royal Wedding

https://eurohistoryjournal.blogspot.com/p/subscribe-to-eurohistory.html
Posted by Seth B. Leonard at 12:48 AM