An Imperial and Royal Wedding: A Brazilian Prince Marries An Egyptian Princess

In April 1949, from their residence at the Palacio Grão Pará in Petropolis, Prince Pedro Gastão, Head of the Imperial Family, and his mother Princess Elisabeth of Orléans and Bragança (née Dobrzensky de Dobrzenicz) announced the engagement of their brother and son Prince João to Princess Fatima Toussoun of Egypt.

Prince João Maria of Orléans and Bragança was born at Boulogne-Billancourt, France, on 15 October 1916. He was the second son and fourth child of the Pedro and Elisabeth: his older siblings included Princess Isabelle, Countess of Paris, Prince Pedro Gastão, and Princess Maria Francisca, Duchess of Bragança. João was followed by a younger sister, Princess Teresa.


Fatima Sharifa Chirine was born at Cairo, Egypt, on 19 April 1923. She was the daughter of Husain Ismail Chirine and Aisha Mussalam. She was a first cousin of Ismail Chirine, who became the second husband of Princess Fawzia of Egypt, former Queen of Iran as the first wife of the Shah. Fatima had been married to a cousin of King Farouk of Egypt, Prince Hassan Omar Toussoun of Egypt (1901-1946). Fatima and Hassan were wed in 1940 and during their union they had one daughter, Princess Melekper Toussoun (b.1943). Fatima became a widow when her husband died when his automobile crashed into a pole while on the French Riviera. There were rumours that King Farouk was quite in love with his cousin's wife/widow - the king did not react well when Fatima and João became taken with one another.

Prince João and Princess Fatima originally met at a 1946 reception in Cairo, which the prince had been invited to attend by King Farouk. At the time, João was a member of the Brazilian air force and also a commercial airline pilot. The pair's romance started there and it culminated in the announcement of their engagement and upcoming wedding in 1949. The king of Egypt was very unhappy at this development: he threatened Fatima with the loss of custody of her young daughter, Princess Melekper, who had remained in Egypt while Fatima was in France with João. 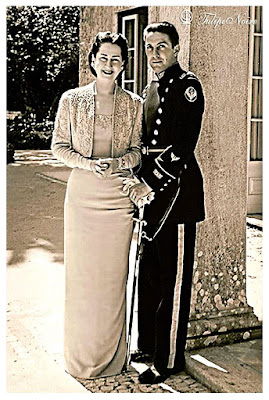 The nuptials between the Catholic Brazilian prince and the Muslim Egyptian princess took place on 29 April 1949 at the Quinta do Anjinho in Sintra, Portugal; this venue was the home of the bridegroom's brother-in-law and sister the Count and Countess of Paris. João and Fatima were wed in a Roman Catholic ceremony, and it was agreed that any children born to the couple would be reared in that faith. The prince and princess had one son, Prince João Henrique (b.1954; also known as "Joãozinho"). The couple divorced in 1971. Both Prince João and Princess Fatima later remarried. Fatima died in 1990; João passed away in 2005.

https://eurohistoryjournal.blogspot.com/p/subscribe-to-eurohistory.html
Posted by Seth B. Leonard at 11:09 PM