On 7 July 1944, Prince Nicholas (Nikola) Michael Francis of Montenegro was born at Saint-Nicolas-du-Pelem, as the only child of Prince Michael (Mihailo) of Montenegro and his wife Geneviève. Prince Mihailo (1908-1986) and Geneviève Prigent (1919-1990) had married at Paris on 27 January 1941. The pair were interned in Germany from 1941 until 1943 by the Nazis; when they were released, they returned to France, where their son was born. In 1947, Mihailo, Geneviève, and Nikola moved to Yugoslavia as Mihailo had accepted a position in Tito's Foreign Ministry - a position he left  in 1948. The family then returned to Paris, where Mihailo and Geneviève's marriage ended.

Upon the couple's divorce in 1949, their son Nikola was raised by his mother and rarely saw his father. Geneviève worked as an orthoptist and raised Nikola as a single mother at Trebeurden. In 1964, Nikola became a student at the Ecole Nationale Supérieure des Beaux-Arts in Paris; in 1971, he obtained a diploma in Architecture and admitted to the Société Française des Architectes.


On 27 November 1976, Prince Nikola of Montenegro married Francine Navarro (b.Casablanca 27 January 1950), daughter of Antoine Navarro (1922-1989) and Rachel Wazana (1930-2011). Francine studied law and later worked for many decades as a designer at the fashion house that she co-founded, Petrovitch & Robinson. Nikola forged his career as an architect. Nikola and Francine have two children: Princess Altinaï (b.1977; married to Anton Martynov) and Prince Boris (b.1980; married to Véronique Haillot Canas da Silva). Crown Princess Francine passed away in 2008, aged fifty-eight. 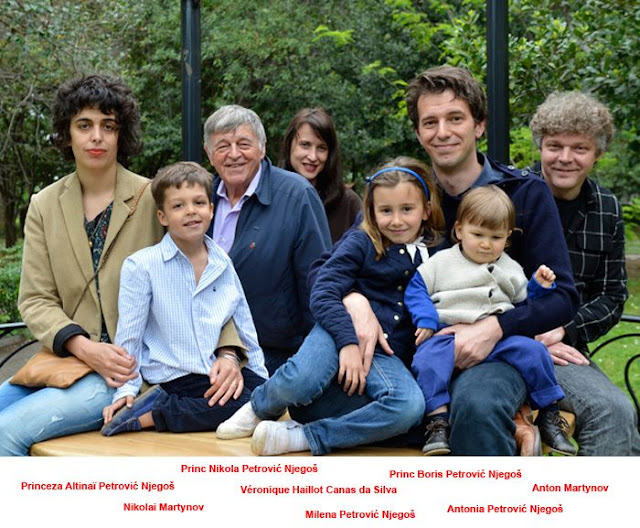 The family returned to Montenegro in 1989 for the reburial of Nikola's great-grandfather and great-grandmother, King Nikola I and Queen Milena of Montenegro. In 2011, Crown Prince Nikola and his family were granted special status by the Montenegrin government; the legislation that was approved by the nation's parliament provides the family with an annual allowance as well as a residence in the country. Crown Prince Nikola now divides his time between Montenegro and France.

https://eurohistoryjournal.blogspot.com/p/subscribe-to-eurohistory.html
Posted by Seth B. Leonard at 3:20 PM